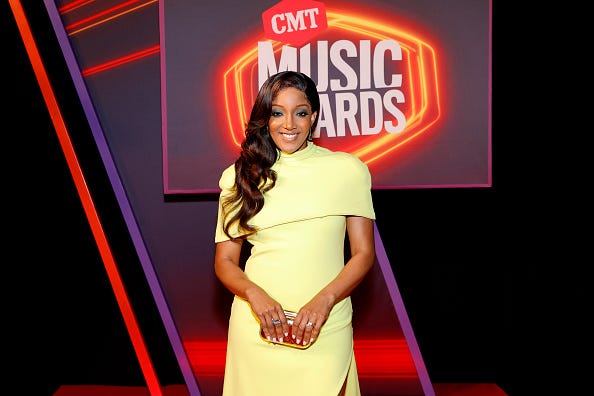 During an installment of CMT’s Probably Shouldn’t Tell You This digital series, Mickey Guyton told a juicy story about a run-in she had with Prince.

As the “Black Like Me” artist is prepping for the release of her debut album, Remember Her, the singer is sharing snippets about her life in the music industry.

In the two-minute viral clip, Guyton exclaims, “Prince, y’all!” She tells the story of a friend in Hollywood who happened to be dating the “Purple Rain” icon. Guyton went to visit her friend in Los Angeles at the time and attended a nightclub. However, due to a “crime scene” Guyton and her pal were unable to access their car when leaving the club.

Mickey’s friend “called Prince to pick us up,” gushed the Country star. Prince showed up to pick up the duo in nothing less than a white stretch limousine. Shortly after being picked up Mickey and her friend were ushered off into a velvet-lined elevator to a ballroom where a Rhodes piano, drumkit, and microphone sat. While Prince was at the piano Guyton got up to the mic and started singing her rendition of Aretha Franklin’s iconic hit, “Natural Woman.” According to Mickey, Prince was floored by her vocal abilities.

The more ya know! Watch Guyton’s entire clip above.