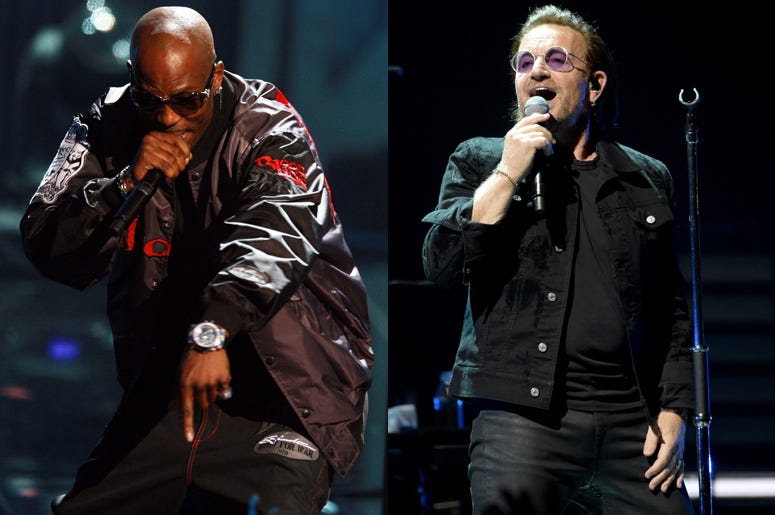 There’s been unlikely musical pairings throughout history and then there’s this.

DMX last released an album in 2012, but that could all be changing soon. X was a guest on N.O.R.E. and DJ EFN’s Drink Champs podcast and dug in on his upcoming album. For one, there’s going to be a ton of collaborators on the record including Pop Smoke, Lil Wayne, Snoop Dogg, Alicia Keys, Usher, and more.

The "and more" is where things start to get interesting.

X revealed that he collaborated with Bono from U2 on a brand new song called “Skyscrapers.”

“It’s crazy,” DMX said about the song. “It got like a Miami feel to it. I feel like I want to shoot the video here.”

X then went on to praise Bono’s vocals on the bridge.

So how did the duo come together? It’s all through their mutual friend, Swizz Beatz. Apparently Bono and Swizz have been friends for years and the producer helped bring the U2 singer and DMX together for this track.

According to Vulture, Swizz Beatz and Bono became friends while working on a track for the Hope for Haiti Now charity album. “Bono, he’s a music lover… I’m a music lover. We knew each other for a while through [Interscope chairman] Jimmy Iovine,” Swizz said.

He added: “It’s like a musical/art/philanthropic relationship that’s there. He’s an amazing guy. He has an amazing family. He embraced me and my people with open arms. He’s a brother.”

As for DMX, he said that he has two songs to finish before his upcoming project is complete.