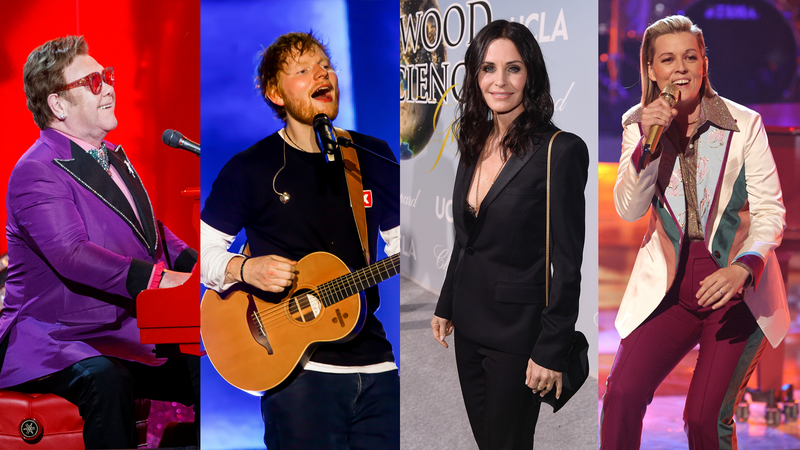 In the clip Cox played the piano, while Ed Sheeran played the guitar and crooned along with Elton John and Brandi Carlile -- in tribute to Lisa Kudrow.

The group performed a cover of "Tiny Dancer" with a Phoebe Buffay twist. Real ones know what that means, but for those not well versed in the all that is Friends, in season three Kudrow's character Phoebe says she thinks the most romantic song is "the one that Elton John wrote for that guy on Who's the Boss?," and proceeds to sing “Hold me close, young Tony Danza." The real song of course, by John uses the lyrics of its title, “Tiny Dancer.”

"One of the greatest moments of my life. This one’s for you @lisakudrow. #phoebe #tonydanza #tinydancer @eltonjohn @teddysphotos @brandicarlile 🎥: @jadeehlers," Cox captioned the video.

Reacting to Courteney's video in the most Pheobe Buffay way, Lisa headed to Cox’s comments section, noting, ”Whaaaaaat??? That’s the most exciting thing ever!!!!” Before sharing a hilarious video of her own captioned, “exceptionally good but… well no “buts,” but…,” where she pointed out that while their attempt great, they didn’t get it quite right. Saying, "Technically it's 'Hold me close, Young Tony Danza,' but what you did was great too. And, including the original song that you wrote, Sir Elton, that was really good too.”

Even though the show's reunion is over, we’re thankful Cox and her crew are keeping fans invested with these nostalgic returns to the series' best moments. Let’s hope they last forever, because we never want to be “on a break” with Friends ever again.