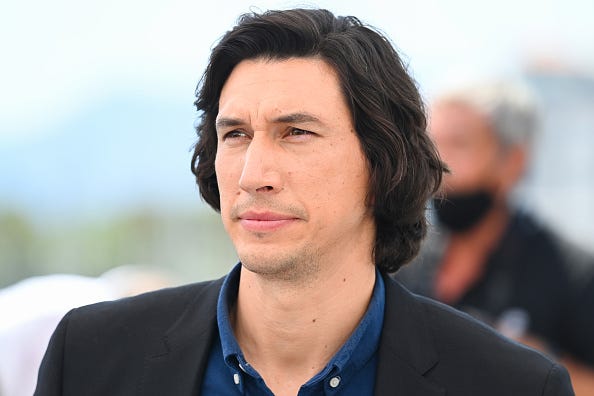 Kylo Ren has turned to the horse side.

Adam Driver, 37, put his buff physique on display as he transformed into a centaur for an amazingly insane new ad for Burberry’s latest fragrance.

In the clip, the “Star Wars” actor runs shirtless on the beach alongside a stallion. The duo then both go into the ocean for a swim as the artistic video shows Driver and the horse become one.

Adding to the vibe of the imagery is moody music compliments of FKA Twigs’ song “Two Weeks.”

The one-minute video is to promote Burberry Hero, the brand’s new men’s cologne. Because who doesn’t want to smell like a half-man, half-horse creature?

"The campaign challenges the traditional stereotypes of masculinity, bringing together horse and man, and creating a modern myth," the company said in a press release, according to E!

"The powerful imagery of a horse against the vast coastline explores Riccardo Tisci's [Burberry’s Chief Creative Office] codes of duality and the power of the animal kingdom. Through the vivid metaphor of a man becoming a mythical creature in the powerful sea, the campaign illustrates the story of a man leaping into the unknown, overcoming struggles and transforming into something new, while remaining true to himself."

While many may not have understood the brand’s message, the clip - and Driver’s toned torso - definitely made a splash on the internet.

“Adam Driver’s Burberry campaign has my attention,” wrote one follower.

"If anyone asks 'what's the female gaze'? The answer is: #AdamDriver's campaign for #Burberry,” added another.

"Today is a good day, NEIGH, a great day. Today Burberry gifted us a wonderful thing. A gift horse. A gift horse-Adam-Driver," wrote a third.

Even television host John Oliver couldn’t help but comment on all the equine sexiness of the ad.

"After an unexpected development that will require John's full attention, there will be no new episodes of 'Last Week Tonight' for the foreseeable future," read a hilarious tweet from the show’s official account.

After an unexpected development that will require John's full attention, there will be no new episodes of Last Week Tonight for the foreseeable future. https://t.co/Nr7SSw8zgC

Further proof that pretty much everyone wants to horse around with Adam Driver.