Alex Trebek is sharing some of his most challenging moments battling stage 4 pancreatic cancer, and his career highlights, in a new memoir.

In an interview with Good Morning America about the book, out Tuesday, the "Jeopardy!" host talked about his life since announcing that he was diagnosed with cancer in March.

"I've received so many expressions of love and so many prayers said on my behalf since the diagnosis was made public that I thought, 'Well, maybe, maybe the people would care to learn something about me," Trebek said.

In Trebek's new book, "The Answer Is...Reflections On My Life," he writes how some days are more difficult than others.

"There was one day a few weeks ago when Jeanie [Trebek's wife, Jean Trebek] asked me in the morning, 'How do you feel?' And I said, 'I feel like I wanna die.' It was that bad," Trebek said.

Trebek also got very candid about the difficult moments he has faced while battling cancer, and the pain that keeps him up at night.

In the book, he reveals times when he was "ready to pack it in," Trebek writes. "Because I understand that death is part of life. And I’ve lived a long life."

One thing that seems to be helping him get through each day is his love for "Jeopardy!"

The 79-year-old is undergoing an experimental immunotherapy treatment.

Although the treatment seems to be working, Trebek said that if it doesn’t, he’s “not going to go to any extraordinary measures to ensure my survival.” 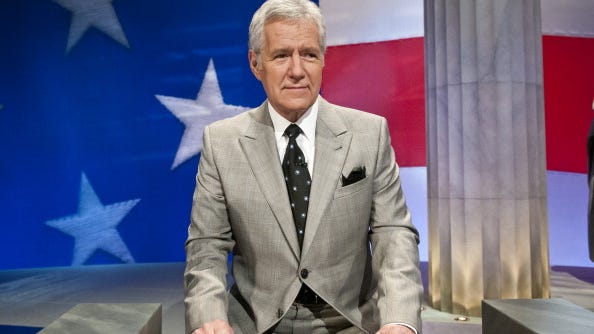 In April, the "Jeopardy!" host announced that he was ready to share his wisdom with the world with his new book.

Trebek was motivated to tell his story after revealing his cancer diagnosis last year and receiving an outpouring of love and support from his millions of fans.

Wondering what Alex has been up to at home? He wrote a book!

Learn more about "The Answer Is...: Reflections on My Life" here: https://t.co/XvuCrqxBt1 pic.twitter.com/j2HsOn6Q2Y

In March, Trebek shared a health update on the one-year anniversary of his cancer diagnosis.

"My oncologist tried to cheer me up the other day ... He was certain that one year from now, the two of us would be sitting in his office celebrating my second anniversary of survival," he said in a video. "If we take it just one day at a time, with a positive attitude, anything is possible."