As Monica Geller famously said, “Welcome to the real world. It sucks. You’re gonna love it!”

While 2020 may have not been your favorite year, “Friends” fans can look forward to something during its final months.

People reported that Amazon just released a “Friends” advent calendar for 2020. For a short time, you can get it on sale for $20. The calendar is currently 40% off.

Lovers of the popular ‘90s sitcom will able to open 25 pockets as they countdown to Christmas. The calendar includes over 40 trinkets, such as themed ornaments and “Friends” inspired recipe cards.

If you’re looking for a holiday gift, the calendar is now available for pre-order (at the sale rate) and will be released on October 27 for $29.99.

The calendar may be great news, but fans received disappointing news at the beginning of the month. 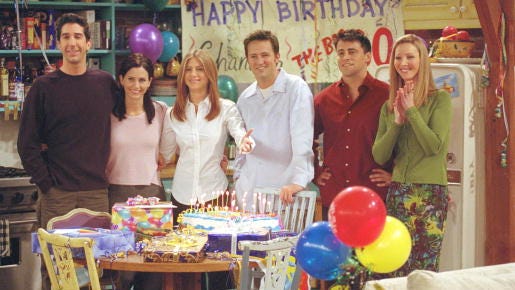 “Friends” fans were notified they'd have to wait a little bit longer for the highly-anticipated reunion special.

HBO Max once again delayed production on the unscripted episode due to the ongoing coronavirus pandemic.

The special, which will reunite all six main cast members, was reportedly set to shoot on August 17th. Due to cases of COVID-19 spiking in the Los Angeles area, the taping was once again called off. According to Deadline, a new production date has not been determined.

Announced in February, Jennifer Aniston, Courteney Cox, Lisa Kudrow, Matthew Perry, David Schwimmer, and Matt LeBlanc were initially supposed to shoot the episode in time for the launch of HBO Max on May 27th.

The special will eventually be taped on the sitcom’s original soundstage, Stage 24, on the Warner Bros. Studio lot in Burbank, California.