Andy Cohen is getting some puppy love once again!

The "Watch What Happens Live with Andy Cohen" host shared some happy news on his Instagram Story by showing off adorable videos of himself alongside his former companion Wacho.

"Reunited with my buddy today!" a masked Cohen said in a clip of himself walking the pooch. "He's happy to be walking around his old haunts," he continued.

He later added, "He's happy, he's healthy, he's pissing on everything in the neighborhood. God is good. Wacha's good. Life is good."

Back in May, Cohen announced that he would have to rehome his beloved dog Wacha after an "incident" with his toddler. "After an incident a few months ago, numerous professionals led me to the conclusion that my home is simply not a good place for him," he wrote in an Instagram post at the time. 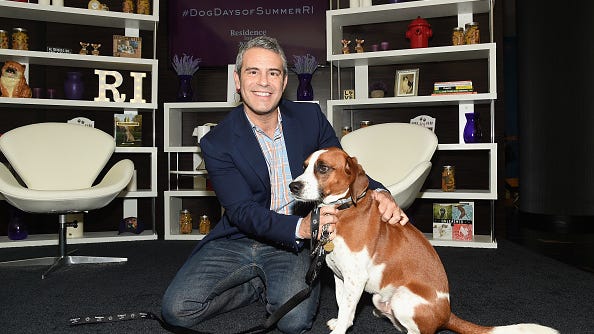 Andy Cohen Rehomes Beloved Dog After 'Incident' With His Toddler

The post began, "As you may know, Wacha is my first baby, my beautiful rescue puppy. He is my pride and joy. When he cam into my life, my world changed. Over the nearly seven years that I've been blessed to have Wacha in my life, we have worked to address some occasional random signs of aggression."

He continued, "No effort was spared in the attempt to help Wacha feel adjusted."

After the birth of his son, Ben, however, things began to get complicated, and Cohen was forced to place Wacha with "his second family, in the place he lived every single time I went out of town."

Since giving the pup a new home, Cohen has shared that he's made an effort to keep the dog as a part of his life.