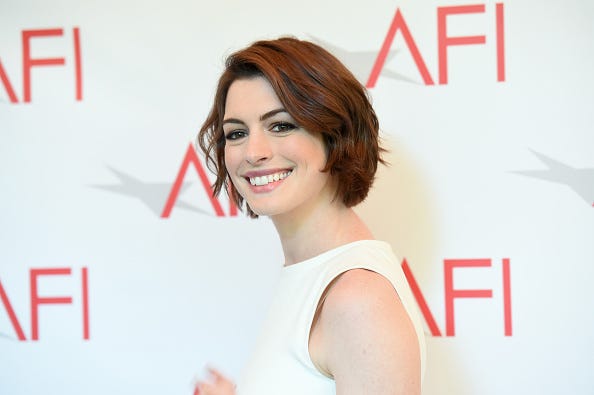 Anne Hathaway has found a way to deal with people’s probing questions about her pregnancy.

The 36-year-old, who is currently expecting her second child, revealed she likes to prank people whenever they ask what she plans on naming her baby, reported People.

While carrying her son Jonathan, who’s now three-years-old, the “Devil Wears Prada” star would "try to come up with names that are beautiful-sounding but will make other people intensely uncomfortable,” Hathaway said during an appearance on “Live with Kelly and Ryan.”

"With Jonathan, we came up with the name 'Quandré,'” she told guest co-host Liza Koshy, who failed to pronounce it properly. “And then you correct them, and they never get it right."

Now with baby #2 on the way, the Oscar winner is back to her old tricks whenever someone dares to inquire what they’re going to call their bundle of joy.

"Again, beautiful name . . . They say, 'Do you know the name?' and we go, 'Africa,” she explained while exaggerating the “Ah” in Africa.  “And you make really intense, sincere eye contact and you don't look away and you don't blink. And you have to watch them just squirm." Vicious!

It’s not for a movie...⁣⁣ #2⁣ ⁣All kidding aside, for everyone going through infertility and conception hell, please know it was not a straight line to either of my pregnancies. Sending you extra love 💕

And while Hathaway acknowledges it’s a little mean, she maintains it’s meant in good fun.

She added, "It's really cruel, but I enjoy it so much. Everyone's so sincere about it and happy for you and being nice to you and all those things, so I like to twist that."

Joking aside, the “Les Misérables” actress and husband Adam Shulman have not revealed what they are really naming their newest addition, the couple is also keeping the baby’s gender and due date under wraps.