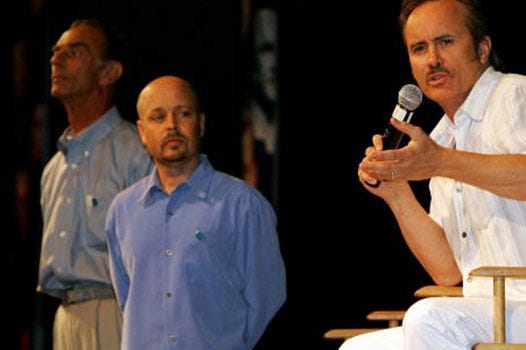 Aron Eisenberg, who famously played Nog in the Star Trek spinoff series “Star Trek: Deep Space Nine,” has died at the age of 50, his widow revealed in a Facebook post.

“It is with extreme regret and sadness to announce that my love and best friend, Aron Eisenberg, passed away earlier today,” said Malissa Longo, who eloped with Eisenberg in December. “He was an intelligent, humble, funny, emphatic soul. He sought to live his life with integrity and truth.”

It is with extreme regret and sadness to announce that my love and best friend, Aron Eisenberg, passed away earlier...

The cause of Eisenberg’s death was not revealed, but the actor had battled kidney issues most of his life. He had undergone two transplants, once when he was 17 and again in 2015.

Eisenberg had only waited four months for his second kidney transplant because a friend volunteered as a donor after reading his Facebook post in need of a new kidney, according to StarTrek.com.

In addition to his 'Star Trek' work, he also appeared in an episode of “Straight Up,” the TV movie “Amityville: The Evil Escape,” as well as “The Horror Show,” “Playroom” and “Beverly Hills Brats.”