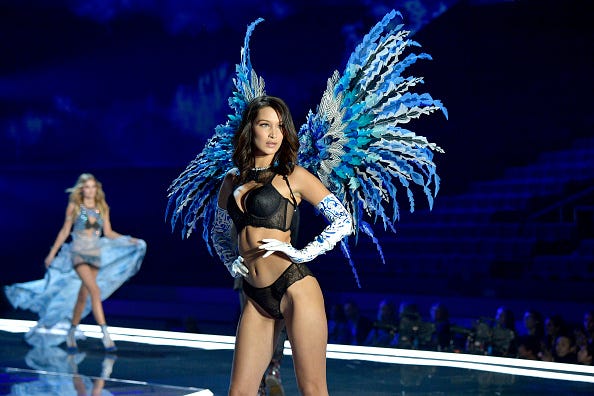 Supermodel Bella Hadid is not a fan of posing in lingerie.

While the 23-year-old infamously walked in three Victoria’s Secret runway shows and was chosen to wear the brand’s coveted angel wings, Hadid revealed she never felt self-assured being scantily-clad on the catwalk, according to WWD.

.@bellahadid opened up about her struggles with mental health and how she “never felt powerful” In Victoria’s Secret shows. https://t.co/WrNeaJ0wyF pic.twitter.com/nAIBI17YEq

"I felt confident in a suit or a beautiful gown on a runway,” Hadid said at the Vogue Fashion Festival in Paris.  “To be in my underwear wasn't something that made me feel, like, 'Yea, I'm going to rock that runway.'"

Interestingly, she gained a major self-esteem after getting to work with one of the biggest pop stars in the world. And we don’t mean her ex The Weeknd.

"Rihanna’s amazing. For me, that was the first time on a runway that I felt really sexy," Hadid added. "When I first did Fenty, I was doing other lingerie shows and I never felt powerful on a runway, like, in underwear."

Prior to walking in the Work singer’s Savage X Fenty show in 2018, Rihanna gave Hadid some empowering advice.

"With Rihanna's show, she was like, 'Walk whatever way you want to walk,” said the younger sister of fellow supermodel Gigi Hadid.

This year Hadid won’t have to worry about feeling uneasy as Victoria’s Secret has canceled their annual lingerie runway show due to financial hardships.

Since breaking onto the modeling scene in 2014, Hadid has taken the fashion world by storm having appeared on a slew of magazine covers and editorial campaigns. In addition, she’s become the face of Dior Beauty, TAG Heuer and Bulgari’s accessory line, among others.

Earlier this year, she even received the distinction of being labeled the Most Beautiful Woman in the World by using the mathematical equation known as the Golden Ratio of Beauty Phi.