Fans of the royal family were shocked to see how much the Cambridge children resembled the older generation in a new clip shared on social media.

The trio of siblings is seen clapping in a garden to show appreciation for those risking their lives and working on the frontlines to fight against coronavirus.

“To all the doctors, nurses, carers, GPs, pharmacists, volunteers and other NHS staff working tirelessly to help those affected by #COVID19: thank you," the post read.

The caption also used the hashtag #ClapForOurCarers, a movement started online to show health care workers and caregivers that “we are grateful."

Hundreds of others joined in on the movement yesterday at 8pm to say thanks from balconies, doorways, and outdoor areas.

Many landmarks like the London Eye and the Wembley Arch also lit up in “NHS blue."

The video has picked up steam largely because fans think the children bear an uncanny resemblance to Queen Elizabeth, Prince William, and Duchess Kate when they were younger.

According to fans, Princess Charlotte resembles her great-grandmother, Queen Elizabeth, Prince Louis is a deadringer for his mother, Kate, and Prince George looks just like his father, Prince William. 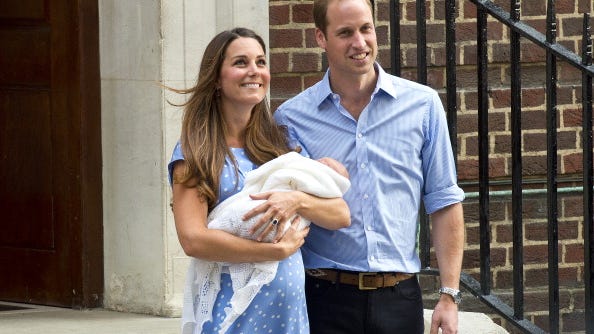 Another noted that William and George could be twins.

A third royal said, “Prince Louis is so cute and looks exactly like his mother Catherine.”

news
Will you still need to wear masks at chains like Walmart and Target? This is where 15 major retailers stand
music
Tracee Ellis Ross responds to ‘Black-ish’ coming to an end next season: ‘It’s gonna be a good one!’
sports
'Dark Side of Football' series to feature episodes on Bill Belichick, the Browns and more: report
news
Ivanka Trump displays toned abs in sports bra and leggings on beach stroll
sports
MLB insider considers Yankees the ‘most logical’ landing spot for Trevor Story
<img onerror="this.onerror=null; this.src='https://images.radio.com/aiu-media/og_775x515_0.jpg'; this.srcset=this.srcset.replace(new RegExp(this.srcset.split('?')[0], 'g'), this.src);" src="https://images.radio.com/aiu-media/getty-katyperry-051421-86cf2052-1cdb-4ee7-a50b-8dd157958b6f.jpg?width=300&height=169&crop=16:9,offset-y0" srcset="https://images.radio.com/aiu-media/getty-katyperry-051421-86cf2052-1cdb