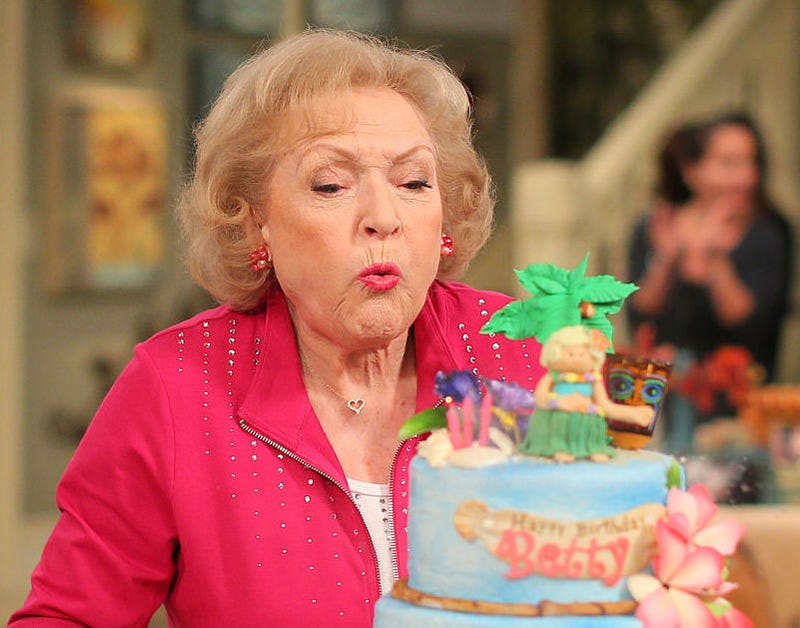 Does Betty White ever age?

While the answer is obviously yes, her vibrant personality paints her as a young soul.

White, the former Golden Girl, will turn 100 on January 17 and wants to celebrate in a memorable way.

The Emmy-winning television star and comedian has invited her fans to celebrate with her in a movie event called “Betty White: 100 Years Young -- A Birthday Celebration.”

“I’m going BIG for my birthday,” she wrote on Twitter, adding, “right to the BIG SCREEN!”

I'm going BIG for my birthday - right to the BIG SCREEN! Get your tickets and join me by clicking here:https://t.co/qXoSO2BYM3

The film will highlight White in her day-to-day life, including “behind-the-scenes on sets, working with her office staff, entertaining at home, lending her voice as an animal advocate and take viewers to her actual birthday party.”

The movie will show clips from some of White’s iconic roles as well, including Rose on “Golden Girls,” her hosting gig on “Saturday Night Live,” her Super Bowl/Snickers commercial, and her role as Sue Ann on “The Mary Tyler Moore Show.”

White said to CNN in a statement, “Who doesn’t love a party?!? This one is gonna be GREAT!”

Tickets for the film are on-sale now!

Ahead of the centennial celebration, fans rallied to protect America’s sweetheart at all costs. Many even demanded that the TV and comedy legend be provided with “national security” to ensure her well-being amid these tumultuous and uncertain items.

Throughout the quarantine, the spunky actress reportedly did a lot of crossword puzzles to “keep her mind jumping."

The award-winning star previously credited her health and longevity to “hot dogs and vodka.”

On her 99th birthday, White said that the one thing that keeps her going and positive is “a sense of humor.