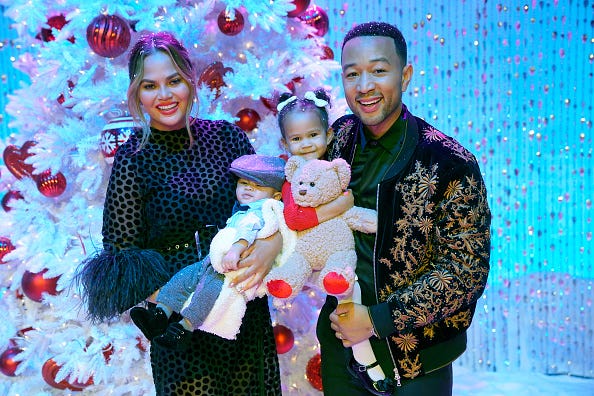 Chrissy Teigen and John Legend have wrangled the little ones for an adorable Vanity Fair photoshoot.

Teigen and Legend, along with their two kids Luna and Miles, have sat down together for possibly one of the cutest Vanity Fair covers in history. The main image shows Legend and Teigen cuddled up together with a very smiley little Luna and a curious Miles.

Teigen sported a floral gown while Luna kicked her foot up for the camera in her deep red ruffles. Legend, looking dapper as always, held a diaper-clad Miles on his lap.

Luckily for fans, that wasn’t the end of the beautiful Vanity Fair photos. The shoot also featured solo shots of the couple, cozying up next to a piano.

Vanity Fair took to Instagram with some of the greatest, family-shot hits – a couple of them from a bathtub while Teigen lovingly bathes her little babes.

“The first family we deserve,” the caption reads, undoubtedly making a joke about a Chrissy Teigen presidency.

The focus of the cover story was family as Teigen and Legend opened up about their lives at home with the two little ones running around. In the story, Luna opened up about wanting to be a good fairy for Halloween.

When Teigen questioned the choice, noting that she had previously expressed wanting to be Darla from “The Little Rascals,” Luna gave “her best attempt at an eye roll,” according to Vanity Fair.