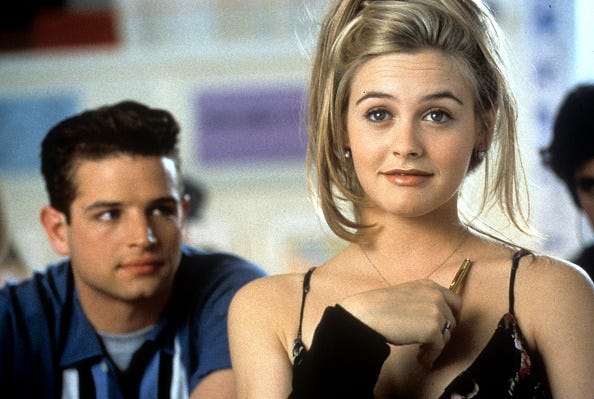 In honor of “Clueless” celebrating its 25th anniversary this year, a pop-up cafe celebrating the teen classic is opening its doors next month.

Entitled “As If!,” the restaurant, which is named after one of the movie’s iconic lines, is the latest nostalgic eatery setting up shop in Los Angeles.

As If!, the Clueless pop-up celebrating film's 25th anniversary is arriving in March https://t.co/Eayocuwidv

Beginning March 31st through May 8th, fans can enjoy "Cher-able" snacks by Chef Royce Burke, take loads of snaps for their Instagram feed alongside recreations from the film’s set and shop for merchandise inspired by the ‘90s romcom.

“We are like ‘totally butt crazy in love’ with the chance to bring the world of Clueless to life,” the organizers said in a statement, according to Deadline. “It’s truly one of those films that has stood the test of time and cult fandom. With the anniversary quickly approaching there was no better team than ours to honor this beloved teen classic and bring Cher’s world to life. To miss out would have just been way harsh.”

Tickets go on sale starting March 6th, cost $35 and include an entree and one side dish. Los Angeles-inspired cocktails, desserts and other menu items will be available for purchase at an additional cost.

Baldwins and Bettys will have 90 minutes inside and can choose from seatings between 4pm - 10pm.

As If!  is the latest pop-up cafe to honor a retro film or television series and follows on the heels of Saved by the Max (“Saved by the Bell”) and The Peach Pit (“Beverly Hills, 90210”).

Last week, it was announced that “Mean Girls” was getting its own tribute eatery with the launch of Fetch in Santa Monica later this spring.

Released in 1995, “Clueless” was a sleeper hit and earned over $56 million at the box office. In addition to Silverstone, the film co-starred Paul Rudd, Stacey Dash and the late Brittany Murphy.

A television reboot is currently in the works that will reportedly have a mystery element similar to “Riverdale.” Whatever!