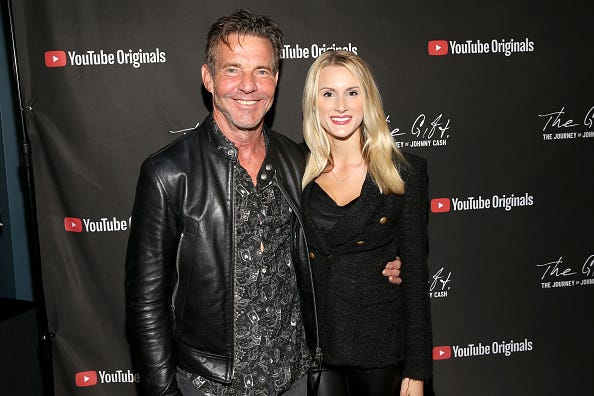 The 65-year-old is having a “laugh” over the news coverage of the couple’s large age gap following their engagement last month.

‘I didn’t go looking for someone younger’: Dennis Quaid on his new love and new roles https://t.co/sT6h85eKjU

"No, it really doesn't bother us,” Quaid said in a new interview with The Guardian.

“Everyone comes from the perspective of their own life and so I can't comment on the way they feel; I can't even get angry."

Contrary to what some may think, the handsome sexagenarian never intended to find such a youthful romantic partner.

"I didn't go out looking for an age gap or someone really younger than me," he explained.

"I met her at a business event and then the relationship developed. You have no control over who you fall in love with. I don't fall in love easy. But I can't let what a few people think control all that.”

The fourth time may be the charm as Quaid is confident Savoie, who is a  Ph.D. student at the University of Texas, is who he’s meant to end up with for good.

“I've been married three times and this is the final one, I know it is. I feel like I have a real partner in life,” the “Far From Heaven” star said.

Quaid was previously married to “Halloween” actress P.J. Soles from 1978 -1983.  Years later, he wed Meg Ryan in 1991 and welcomed a son, Jack, the following year. The pair divorced in 2001. He married his third wife  Kimberly Buffington in 2004, with whom he shares 11-year-old twins Thomas and Zoe. The couple finalized their divorce last year.

Fun fact: At 27, Quaid’s son Jack is just a few months older than his fiancée.

While the couple has yet to reveal a wedding date, Quaid previously described how he popped the question.

“I had the ring in my pocket… It has been kind of a month-and-a-half plan… I wanted it to be private,” Dennis told “Extra” of the moment which occurred while promoting his latest film “Midway” in Hawaii.

“She was actually taking a selfie of us, and I put the ring in front and said, 'Will you marry me?' — and then she fell down.”