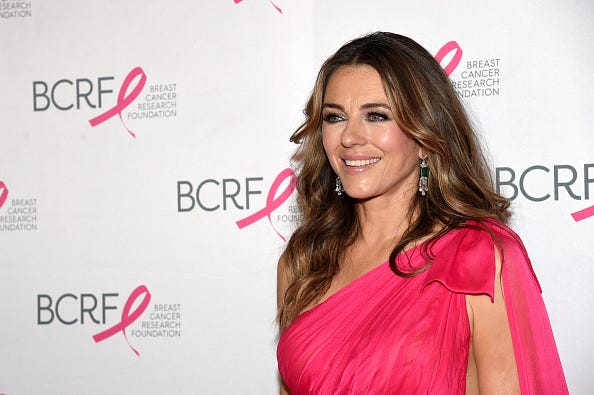 Who needs a model when you look as fabulous as Elizabeth Hurley?!

The 54-year-old put her svelte physique front and center in a strapless bikini to promote her namesake swimwear line on social media.

Hurley was all smiles in the poolside snap as she leaned in to dip her toe in the water.

“Last chance for a Christmas treat on @elizabethhurleybeach 30% off ALL bikinis & one pieces- even if they’re already on Special Offer,” the “Austin Powers” actress captioned the photo wearing the navy and white striped Marseilles Bikini from her Elizabeth Hurley Beach brand.

The English star’s over 1.4 million followers were quick to offer up their praise as the comments were overflowing with compliments to her natural beauty.

“Just like a fine wine...gets better with age,” wrote one fan.

“The most beautiful woman in the world!!!,” added another.

As far as maintaining her heavenly figure, Hurley recently revealed she doesn’t spend hours sweating at the gym.

"I don't really do any exercise per se, but I'm extremely active,” she told “Good Morning America.”

Instead, the “Bedazzled” star prefers to get her heart racing doing real-life hard work because she feels people who perform manual labor have the best bodies.

“So I try and do as much manual labor as I physically can. I use a chainsaw, I use a hedge trimmer. And, you know, you burn a ton of calories and you're using everything [in your body],” she said, before revealing the added perk of her workouts.

“And [in the end], you've cut the hedge," she said laughingly.