Kate Middleton and Meghan Markle may be sister-in-laws, but they have completely different fashion styles.

After joining the Royal Family, their styles have continued to evolve, making them two of the biggest trendsetters and style icons in the world. 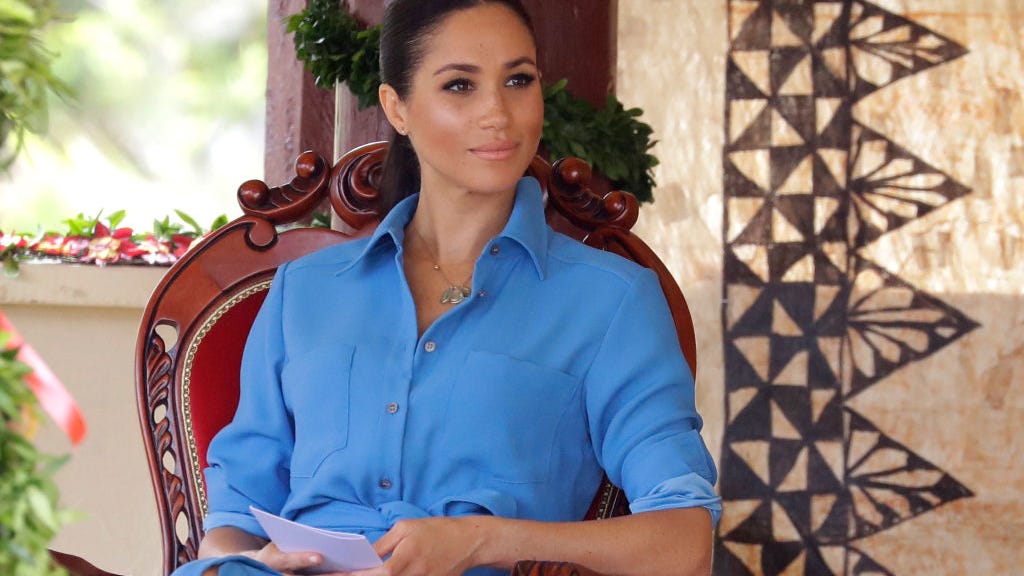 We’re comparing their looks during some of their milestone moments: 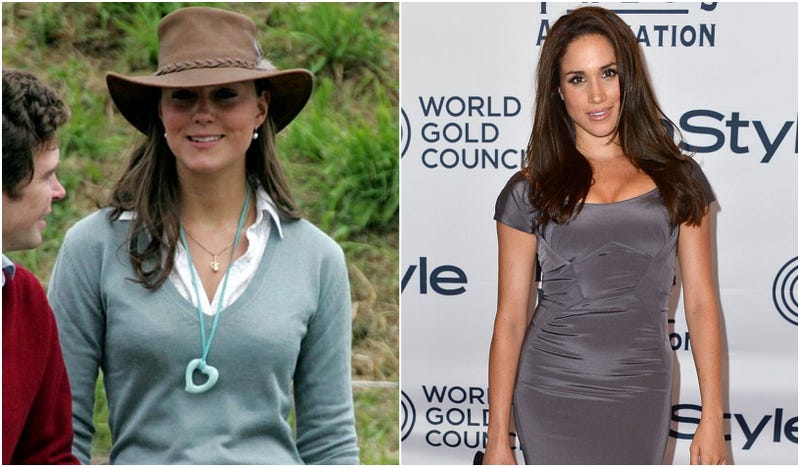 Before They Were Royals

Before she was Duchess of Cambridge, Kate Middleton was a 19-year-old college student at St. Andrews where she met Prince William. During her college days, she opted for a more pared back wardrobe consisting of simple white tees, flared jeans, and patterned dresses. She also loved wedges and knee-high boots.

Meghan Markle, on the other hand, was an up-and-coming Hollywood actress prior to meeting Prince Harry so her style didn’t really follow royal guidelines. When hitting the red carpet, she’d often opt for mini skirts, bandeau dresses, or blazers paired with some cute slacks. Stylin'. 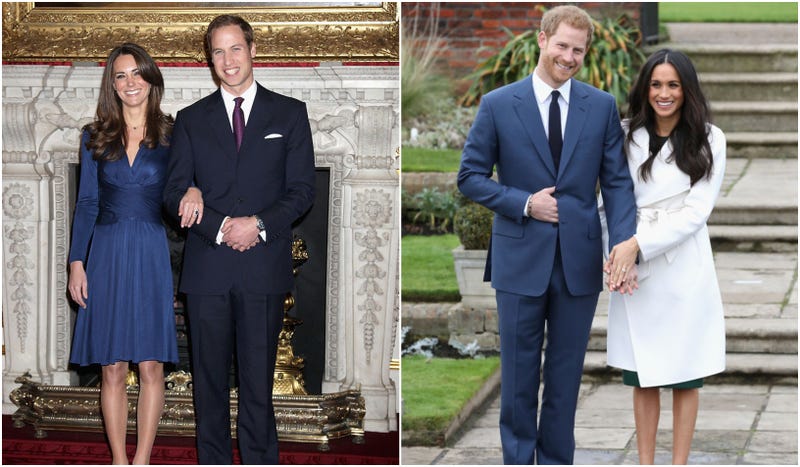 Kate Middleton and Prince William publicly announced their engagement on November 16, 2010. She chose a royal blue wrap dress by Issa London, which became iconic and quickly sold out. The dress matched her 12-carat oval sapphire engagement ring. She finished off the look with loose curls and black heels. In their official engagement photos, Kate opted for a more modest white dress.

Meghan Markle opted for a more modern look during the photocall to announce her engagement to Prince Harry on November 27, 2017. The former actress chose a stunning navy gown with a partially sheer top and a full tulle skirt. It was reportedly a custom order from Ralph & Russo, which cost $75,000. To announce the engagement, Meghan wore a chic white wrap coat, an emerald green dress under, and nude pumps. 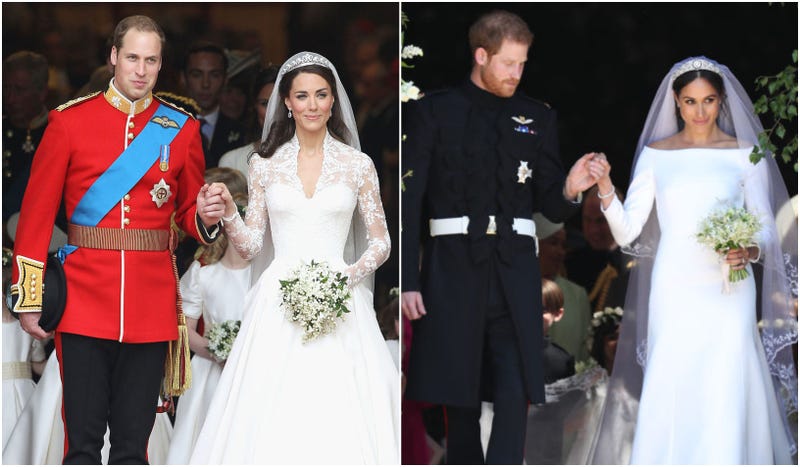 For her wedding dress, Kate worked with Sarah Burton at Alexander McQueen on the design to make her vision come to life. According to Town and Country, she aimed to combine tradition and modernity. The bodice was inspired by Victorian tradition, featured a train that was nearly nine-feet long, and had handmade lace on the skirt and bodice. Years later, the dress continues to mesmerize.

Meghan opted for a more classic look when she walked down the aisle. Kensington Palace revealed the dress was made by Givenchy's Clare Waight Keller. The minimalist pure white gown featured a boat neck with three-quarter length sleeves. It was made from silk. She also had a 16-foot veil with floral detail representing all 53 countries of the Commonwealth. 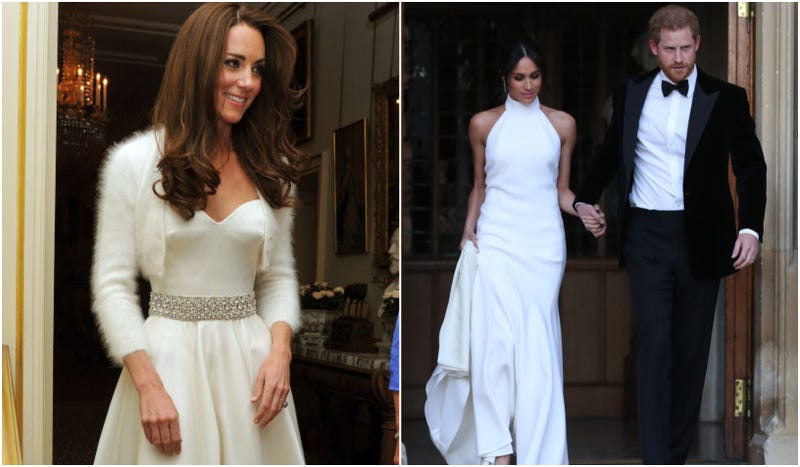 Kate slipped into something slightly more comfortable for the reception.
The satin gown was simpler with a sweetheart neckline, wide skirt, and jeweled belt. She also had a white fuzzy shrug to keep her warm and wore her hair in loose curls.

Meghan continued the tradition of a second wedding dress squeezing into a slim and fitted gown from Stella McCartney. She made a bold statement by going in a sleeveless style with a halter neck. She also opted for an updo. 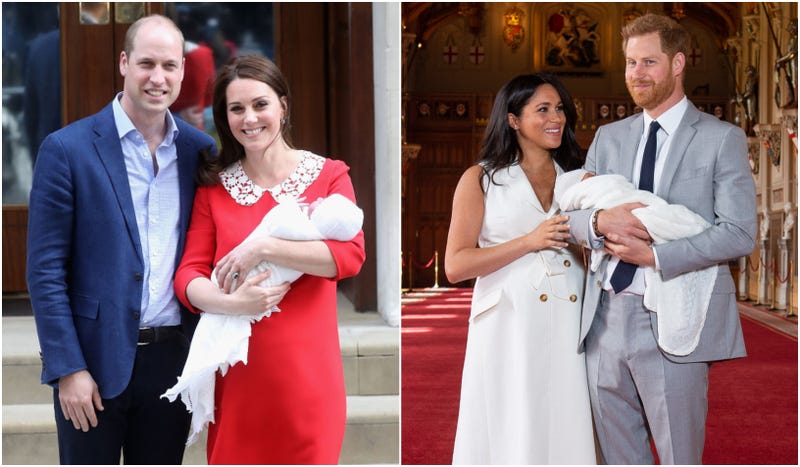 Over the years, Kate Middleton introduced her royal children to the world outside of the Lindo Wing as per tradition. Each time she donned classic dresses. With Prince George, she opted for a baby blue dotted dress, with Prince Charlotte she wore an ombre dress that was yellow on top and white on the bottom, and with Prince Louis she chose a red dress with a white lace collar.

Meghan Markle skipped the traditional royal hospital photo and introduced her son, Archie, to the world at St. George’s Hall at Windsor Castle. She opted for a modern look with a sleeveless trench-style dress. 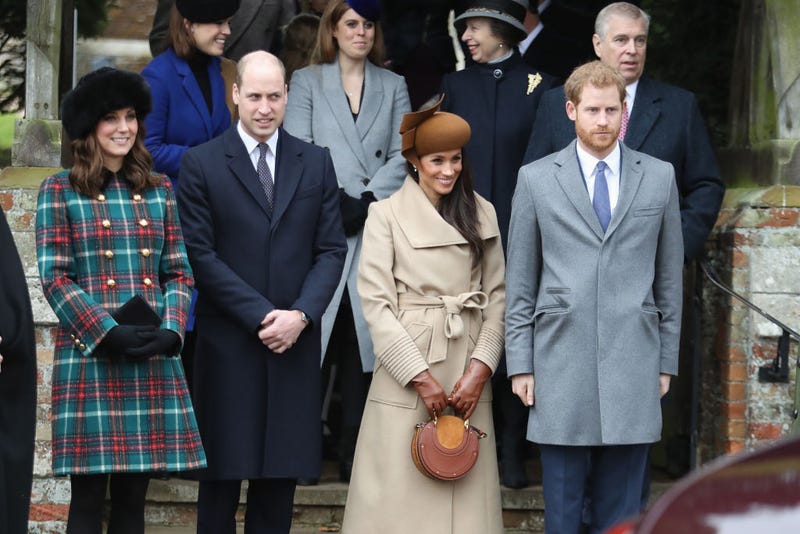 In December 2017, Kate joined other members of the Royal Family at Sandringham to celebrate the Christmas holiday. For the service, Kate wore a festive red and green wool tartan coat from Italian brand Miu Miu. She completed the outfit with black tights, black suede pumps by TODs, which feature a block heel, along with black gloves and a black fur hat.

Meghan attended the Christmas festivities and was pictured alongside Kate. However, their styles couldn’t be more different. Meghan kept it simple with a brown color palette. She wore a Sentaler coat with brown Stuart Weitzman boots, a caramel fascinator, and a brown Chloé bag.