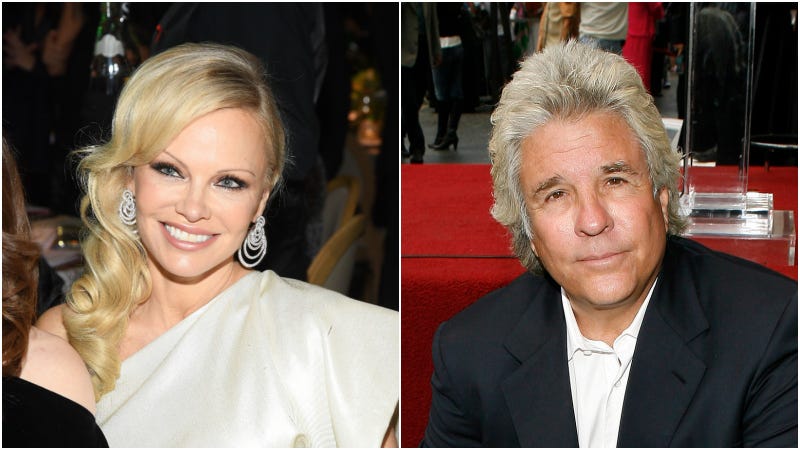 Love can be fleeting.

Few stars understand that as well as Pamela Anderson. The “Baywatch” beauty was married four times before 2020 (to Tommy Lee, Kid Rock, and twice to Shannen Doherty’s ex Richard Salomon).

But it wasn’t until she tied the knot for the fifth time with film exec Jon Peters that Anderson saw just how fast that fuzzy newlywed feeling can fade.

Even when you have a secret ceremony in Malibu, a marriage isn’t always a day at the beach (or a traipse on the yacht).

Coming in at just under two weeks, the marriage between the 52-year-old actress and 74-year-old “A Star Is Born” producer is impressively brief, heartbreakingly short and storied with a lifetime’s worth of romance, drama and alleged text messages.

This is a timeline of Pamela Anderson’s 12-day marriage to Jon Peters.

1980s: Pamela and Jon date briefly after meeting at the Playboy Mansion

While their marriage didn’t last long, Anderson and Peters have a long romantic history dating back more than three decades. The two first met at the Playboy Mansion in the ’80s, reports LA Magazine. Two days after this year’s wedding, Pam tweeted this photo of herself and Jon in 1989 at the premiere of war film “Glory.”

Pamela Anderson (@pamfoundation) and producer Jon Peters tied the knot in a private ceremony in Malibu on Jan. 20, The Hollywood Reporter has learned. https://t.co/IWAf7mflPU

Pamela and Jon rekindled their old flame when they got married in a private ceremony in Malibu on Jan. 20. The nuptials drove both Anderson and Peters to lofty words.

In a statement to The Hollywood Reporter, the film producer said, "There are beautiful girls everywhere. I could have my pick, but — for 35 years — I’ve only wanted Pamela. She makes me wild — in a good way.”

Jon is the original ‘bad boy’ of Hollywood – no one compares –
I love him deeply like family.
His life used to scare me.
So much for a girl like me. Now I’ve seen more of life and realize ..
He’s been there all along. Never failed me –
I’m ready now and
he’s ready too – We
understand
and respect each other – We love each other without conditions. –
I’m a lucky woman. – Proof
God has a plan

Three days after they announced their marriage to the world on Jan. 21, Anderson shared the first photo of the two as newlyweds. Pam is bubbly and beaming with a big smile in the pic, which she shared on her Instagram story, while Jon looks on stoically next to her, donning a sleeveless North Face vest and reflective sunglasses.

"We would be very grateful for your support as we take some time apart to re-evaluate what we want from life and from one another," Pamela Anderson said in a statement.https://t.co/mJtFz3KLW5

If they can’t make it, what chance do the rest of us have? Less than two weeks after their wedding ceremony, the couple abruptly called it quits. According to a source close to the actress, the two had not yet filed for a marriage certificate following the Malibu ceremony, which was attended by Anderson’s two sons and Peters' three daughters and ex-wife Christine Forsyth-Peters.

In a statement to THR, Anderson said, “We would be very grateful for your support as we take some time apart to reevaluate what we want from life and from one another. Life is a journey and love is a process. With that universal truth in mind, we have mutually decided to put off the formalization of our marriage certificate and put our faith in the process. Thank you for respecting our privacy.”

The healing process began for Pam when she posted a stunning photo of herself to Twitter one day after her split from Peters was announced. The photo, which featured the star showing off her cleavage in a plunging black dress on the beach, was captioned with a poem caption explaining what empowerment means to her:

Pamela Anderson's husband ended their marriage via text. Read the message he sent her: https://t.co/CjP1u8vKdb

Reports broke out on Feb. 7 claiming Peters ended his relationship with Anderson over text. Despite allegedly calling their whirlwind affair a “beautiful amazing love fest," the 74-year-old admitted “this whole marriage thing… scared me.”

“It made me realize that at 74 I need a simple quiet life and not an international love affair,” Peters’ alleged text continued. “Therefore, I think the best thing we can do is that I’m going to go away for a couple of days and maybe you need to go back up to Canada we did it. The world knows we did it and I think now we need to go our own separate ways. I hope that you can forgive me.”

“Everything they told you was a lie,” Peters allegedly wrote in an email to a source.

According to the report, Peters claimed that Anderson was the one who proposed to him via text, despite rumors that it happened the other way around. “Needless to say that when she texted me that she wanted to get married, it was kind of a dream come true even though I was engaged to someone else and the lady was moving in,” he shares.

The film producer also allegedly claimed that he paid off some of Anderson’s debts before the relationship hit the rocks. “I dropped everything for Pam. She had almost $200,000 in bills and no way to pay it so I paid it and this is the thanks I get. There’s no fool like an old fool,” he writes.

A representative for Anderson denied these claims, telling the Post: “These claims are not only entirely fabricated, they are ludicrous.” The statement continues, “Despite Mr. Peters’ efforts to elicit a response from Ms. Anderson, she has no comment to provide and wishes him well.”