Things have never looked brighter for those on Team Brad and Jen.

Nearly 15 years since their November 2005 separation, Brad Pitt and Jennifer Aniston have never been on better terms as exes.

The former couple has been beautifully amicable over the past year, especially this winter.

From crossing paths during the holidays, to nearly crossing paths at the Golden Globes, to the SAG reunion heard around the world, the “Once Upon a Time in Hollywood” star and “Friends” icon have made fans wait with bated breath for each new update as they navigate singledom and their former relationship in the public eye.

We don’t quite know how we got here, but we’re not complaining.

These are all the times Pitt and Aniston got our hopes up by being friendly in 2019 and 2020.

So...Brad Pitt Was Spotted Hanging Out Outside of Jennifer Aniston's Birthday Partyhttps://t.co/dg792hE4OT

Pitt attended his ex-wife’s birthday party in February 2019. People reported that the actor was seen walking into the “Friends” star’s 50th birthday bash at the Sunset Tower Hotel in Los Angeles. The best part? He was recognized by a picture of the back of his head while wearing a cap.

"It was a big night for Jen," a source told People. "The important people in her life gathered to celebrate with her. Brad fits into that group, and it was natural that he would want to come."

Aniston’s birthday wasn’t the only party of hers that her ex-husband attended last year. In December, Pitt made an appearance at Aniston’s annual holiday party. The actor was reportedly among the first to arrive and one of the last to leave.

Brad Pitt tells ET anchor that he is okay with running into Jennifer Aniston and she is a good friend. #GoldenGlobes pic.twitter.com/zCNGaWxN2x

Brad calls Jen his 'good friend' before the 2020 Golden Globes

Following the holiday party, people were naturally curious about what terms Brad and Jen were on. Speaking to ET before the show, Pitt was confident that he and his former wife would cross paths.

He went on to call the hypothetical run-in the “second most important reunion of her year,” referring of course to Jen’s Instagram debut: a new pic of her with the entire main cast of “Friends.”

During Brad Pitt’s acceptance for best supporting actor in a motion picture for his role in “Once Upon a Time in Hollywood,” Aniston smirked at a joke the 56-year-old actor made about why he didn’t bring his mother to the event.

Pitt had the zingers ready when he won the award for best supporting actor.

“I gotta add this to my Tinder profile,” the 56-year-old started his acceptance speech.

Pitt joked about not relating to his character in “Once Upon a Time in Hollywood,” sarcastically calling the "difficult part" about the "guy" who "doesn't get on with his wife" a "big stretch."

Cameras cut to Jennifer Aniston, who was smiling at her ex-husband’s funny banter.

‼️ EXCLUSIVE ‼️ Brad Pitt stopped everything backstage to watch Jennifer Aniston's acceptance speech at the #SAGAwards. Wow guys—it really has been our day, our week, our month, and even our year. https://t.co/m7r01pojsC pic.twitter.com/th9sm1js4D

Just two categories after Pitt’s win, Jen accepted her award for best actress in a drama series for her role in the Apple TV series, “The Morning Show.”

In a video shared by E! News, Pitt watched his ex-wife deliver her acceptance speech, silently looking on a large screen backstage. 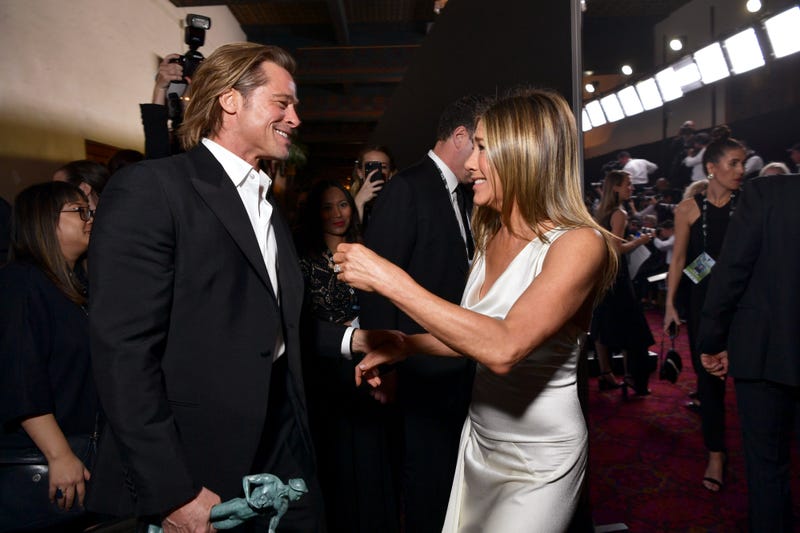 The former married couple reunites backstage at the SAG Awards

This was the moment we’d been waiting for all awards season.

After Aniston’s acceptance speech, the former married couple officially reunited backstage. Photos revealed Pitt and Aniston greeting each other with a big smile backstage at the award show.

The two appear to be going in for a hug, as Pitt held Aniston’s wrist in one hand and his award in the other. Other photos revealed Pitt holding onto Aniston’s arm as she walked away. Even as Jen made her way to leave, her hand could still be seen on Pitt's chest.