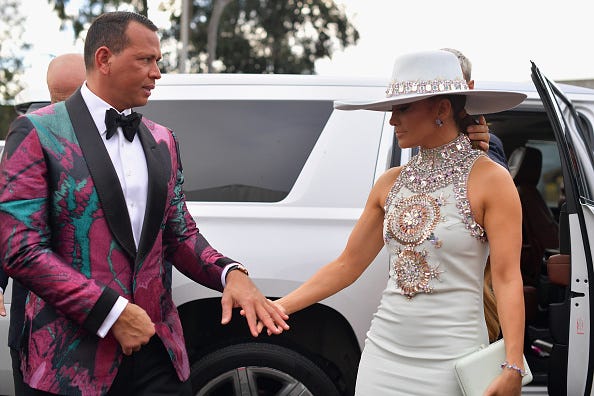 Jennifer Lopez can seemingly do anything as she’s conquered the music, film, TV and fashion industries, but there’s one skill she isn’t well-versed in … driving!

For her 50th birthday, J.Lo’s fiancé Alex Rodriguez gifted her a 2019 red 911 Carrera GTS Porsche that retails for $146K, according to People.

The former MLB star documented  the surprise in a video where he revealed the “Waiting for Tonight” singer hasn’t driven in 25 years. Driving Ms. Lopez!

Enlisting the help of Jennifer’s twins Alex and Emme and his daughters Natasha and Ella, A-Rod blindfolds the birthday girl and has the kids roll up in the luxury vehicle which features customized J.Lo designs.

Upon removing the blindfold, the “Hustlers” star is speechless and overcome with emotion.

Happy Birthday @jlo ! We hope you you enjoy your beautiful new car! - Ferny Rodriguez and the @oceanautoclub team.

Well that proved to be an over exaggeration, as the couple then took the Porsche for a spin with the pop diva firmly behind the wheel.

“Let me see if I remember how to drive,” she said.

Meanwhile a visibly nervous Alex jokingly responded by saying, “Can I get a double seat belt?”

The surprise gift capped off a festive week of celebrating her milestone birthday as Jennifer threw a big blowout at Gloria Estefan’s Star Island estate with 250 friends and family including Ryan Seacrest, DJ Khalid, Ashanti, and Fat Joe.

Three days later, she also wrapped up the North American leg of her sold-out “It’s My Party” Tour and now heads abroad for a few international dates.

So it seems she’ll have to wait a little while longer to take her new Porsche out for a long drive.