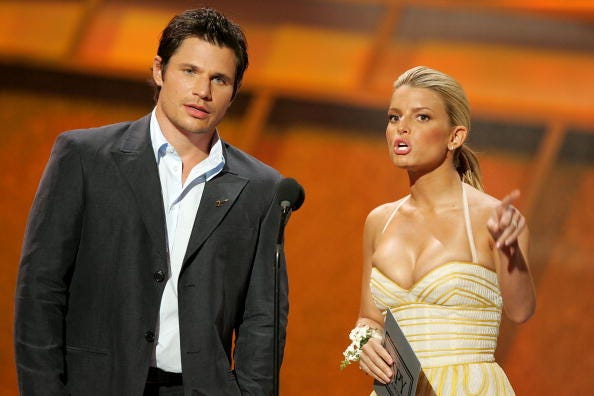 Jessica Simpson wishes she had protected her fortune better during her divorce from Nick Lachey.

The 39-year-old revealed her biggest regret was not having a prenuptial agreement with the 98 Degrees singer, according to People.

“I wish I would’ve signed a prenup,” Simpson said during an appearance on “The Dr. Oz Show.” “The funny thing is that Nick wanted me to sign a prenup but I was so offended.”

The “Public Affair” singer was 22 when she walked down the aisle for the first time and assumed the couple's romance would last forever.

She continued, “I’m like, ‘But we’re going to be together for the rest of our lives. We’re saying our vows to God and in front of all of our family and friends. This is never going to end.’ And we didn’t sign a prenup.”

Perhaps even more shocking is the fact that Simpson and Lachey have apparently cut all ties to each other since their 2006 divorce.

When Dr. Oz asked the status of the former couple’s relationship, Simpson responded, “There is not one.”

But Lachey appears to think they are on slightly more amicable terms.

"I'll be honest, I obviously haven't read the book, so I don't know what she said or what she revealed there," Lachey told Hoda Kotb earlier this week. "But I'm certainly happy for her and her life; I know she is happy for us."

Simpson’s revelations are just the latest in a string of bombshells that have been disclosed since the release of “The Dukes of Hazzard" star's memoir “Open Book.”

The mother of three has admitted to being drunk during an appearance on “The Ellen DeGeneres Show,” discussed her battles with alcohol and pill addiction, and alleged that John Mayer was obsessed with her during their brief romance following her divorce from Lachey.