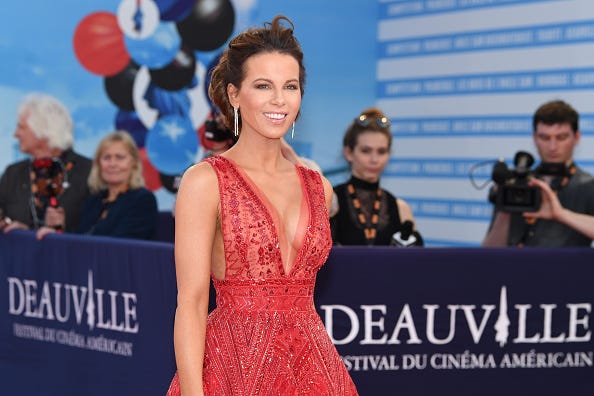 Kate Beckinsale turned up the heat over the weekend with her sizzling bikini photos and her fiery Instagram comments.

The 46-year-old shared multiple snaps of her enviable figure in a series of bathing suit pics while vacationing in Cabo San Lucas, Mexico.

Although the “Underworld” star mostly garnered praise for flaunting her toned physique while modeling in the different two-piece swimsuits, one ageist commenter lashed out by writing: "Shes too old..looking for attention hahahaa!!"

Beckinsale was clearly not into anyone raining on her bikini parade and turned the vitriol into a teaching moment by posting a very lengthy response, reported TooFab.

"Are you aware that when you get the urge to accuse someone of something, especially someone you don’t know, or attribute an intention without ever having met the person, that the only thing really being achieved is revealing something about yourself or something you fear about yourself?" Beckinsale began.

"I don’t know you and I don’t know who has made you feel that if you get older you have no value, can’t be attractive or sexy or have a relationship with your body that isn’t only self loathing, but as one female to another, don’t let any of that noise bother you,” she added. “You’ll feel more powerful, may well physically blossom, know who you are and what you want and get good at setting healthier boundaries.”

Without berating the woman who left the catty comment, Beckinsale tried to enlighten her with words of female empowerment.

"If you’re young and fearing getting older, don’t. It’s not at all how people scare you it will be especially for a woman, “ she continued.

“You’ll come into your own power in a way that feels steady and so many more things will feel possible. The people or press that are scaring you that your value is tied up in youth, or in fact anything that is not currently within your reach, is noise I do hope you allow yourself to ignore.”

The English actress finished off by wishing the woman well and that she think twice before leaving negative comments in the future.

“Sending love and the real hope you receive this message in the spirit that it's meant,” Beckinsale wrote. “I know you have more to offer than leaving mean comments that illuminate far more about you than they do about the people you choose to comment on.”

One thing’s for sure, you’re never too old to school the haters.