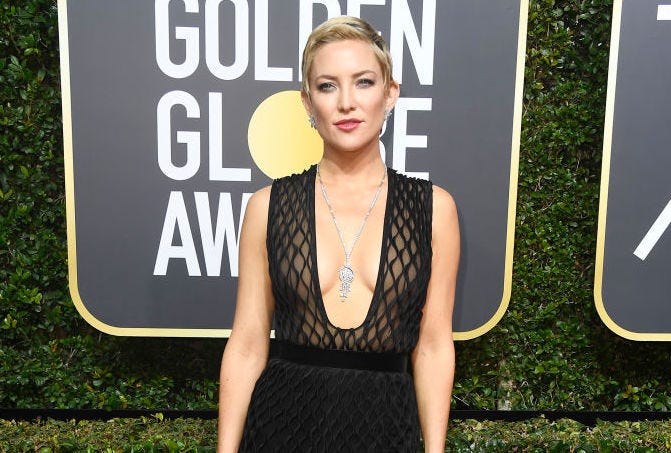 Kate Hudson has no issue whatsoever with nudity.

The mother of three reflected on baring it all for the cameras as part of an essay for InStyle’s 25th anniversary issue.

While the “How to Lose A Guy in 10 Days” star loves “any excuse to wear a bikini,” she first posted nude for InStyle back in 2001 just as ascent in Hollywood had begun.

Three kids and eight InStyle covers later, @KateHudson says that life is really good. “I turned 40 earlier this year, and people kept asking how I felt. But I really wasn’t thinking about it at all. It’s just an age, and I think it’s a great age. You’re at a phase in your life where you’ve actually earned some wisdom. It’s kind of nice to have some years under your belt. And you know what? I’m even more fun now than I was back then, damn it.” More on how her life has changed since she first graced our cover at age 16 with mom Goldie Hawn at the link in bio. #InStyle25 | Photographed by @paul.mclean1; Styled by @sophielopez

“I was newly married [to musician Chris Robinson], and my whole career had just shot up after 'Almost Famous' came out,” she recounted. “I posed naked for the cover, and I was strategically draped with what was basically chain mail. The stylist had a very hard job.”

While some newcomers may have found it nerve-wracking, Hudson disclosed how she feels completely comfortable stripping down.

“To be honest, it doesn’t take a lot for me to take my clothes off,” she said. “People can say whatever they want, but I like being naked. Always have!”

Adding to her carefree nature is the fact that Hudson feels no anxiety about recently turning 40.

“It’s just an age, and I think it’s a great age,” she continued. “And you know what? I’m even more fun now than I was back then.”

No doubt part of her fun these days entails spending time with her ten-month-old daughter Rani. Hudson and boyfriend Danny Fujikawa welcomed their first child together on October 2nd.

While she says being a working mom is a “juggling act,” Hudson wouldn’t want it any other way.