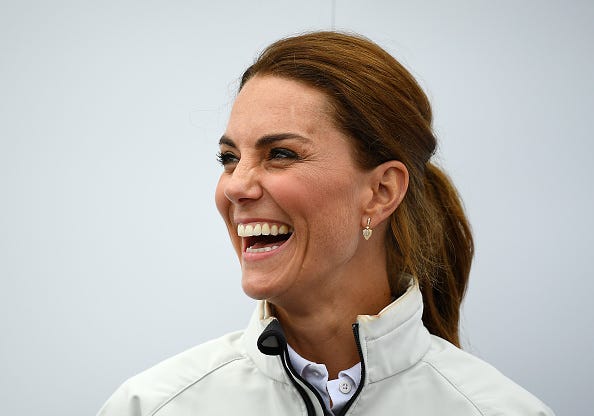 It may be the middle of summer, but Kate just stunned the world with a very bold fashion choice, showing off her legs in shorts, according to Page Six.

Now, for us commoners, that’s an everyday occurrence, but for the Duchess of Cambridge it’s something she has not done in at least eight years, since becoming a member of the royal family.
In fact, the last time she was seen wearing them in public was 11 years ago.

Kate Middleton spotted in shorts for first time in over 10 years https://t.co/EmHFMrywB0 pic.twitter.com/KuYKnvmN5X

The 37-year-old went rogue while boarding a boat at the King’s Cup Regatta in Cowes, England. Looking completely chic and appropriate for the event, Kate donned a sporty jacket, baseball cap and the rare pair of navy shorts. Gasps ensued!

But of course she nailed it, and the Internet couldn’t agree more.

While another added, “Good for her. It must be refreshing for her to be comfortable.”

A third showed their enthusiasm and added a little royal wishful thinking, “No one freak out, but Kate Middleton wore shorts??? Yassss queeeeeennnnnn.”

While the mother of three is always impeccably dressed, when the occasion calls for a more casual ensemble, she often wears jeans or even leggings.

And since it’s not royal protocol for women to wear shorts, the last time she did was prior to marrying Prince William in 2011. Back in 2008, a then-single Kate attended a Day-Glo Midnight Roller Disco charity party in London and stole the show in a pair of neon yellow shorts. Scandalous!

Captain George cheering on his mum and dad at today’s King’s Cup ⛵️ Look at his missing teeth...what a cutie! #princegeorge

Here’s hoping Kate has more opportunities to follow the fashion advice of another royal style icon who embraces shorts at every turn, her eldest son Prince George.