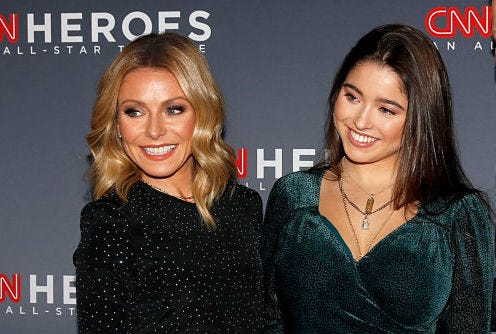 It’s prom season, which means the gowns are out to play. Kelly Ripa’s daughter had a dress of her own to debut, but it had been tweaked since Ripa last saw the plans to feature a much lower neckline than she anticipated.

Ripa chatted about her daughter’s dress during an interview on the “Jerry O’ Show.” Lola Consuelos worked with a tailor to design a custom-made, emerald gown for her last high school hurrah.

Ripa had seen the plans for the dress, but when she saw the real deal on daughter Lola, there was a shocking aspect.

Host Jerry O’Connell flashed a photo of a beautiful mother-daughter moment on prom night. “That’s the prom dress that we had made and then she had altered behind our back,” Ripa said of the photo. “That’s why, you know, the girls are fully on display.”

Hot damn, there’s nothing I ❤️ more than the pleasure of dressing a Consuelos babe (or two). 💥🔥⚡️

That wasn’t the end of the jabs for Ripa, though. “Everybody came down the stairs together. And I just mean Lola,” she quipped.

But Ripa made a point to sing her daughter’s praises as well, noting, “She’s a smart girl. She’s a nice girl.” If only Ripa could get a hold of her on her cell phone…