Kevin Bacon is making the most of his time while practicing social distancing amid the coronavirus pandemic.

The 61-year-old showed off his playful side in a video where he put his popcorn-catching skills on display while in self-isolation with wife Kyra Sedgwick.

In the clip, the "Footloose" star begins on a high note by successfully catching a piece of popcorn in his mouth.

Sedgwick is then seen in the background commenting on what a mess he’s making.

I love that @BrunoMars has a song called “Locked Down with Kevin.” Time for some popcorn in Cali. pic.twitter.com/Gtq7habo4H

But the antics are too hard for her to resist, as “The Closer” actress quickly joins in and proves victorious on her first attempt.

Bacon continues throwing up popcorn with varying degrees of success, which prompts Sedgwick to chime in, “Never mind dear, I’ll clean up.”

Throughout the forty-second video Bruno Mars’ 2012 hit “Locked Out of Heaven" plays in the background.

Bacon captioned the clip by adding his own spin to the song’s title to fit California’s stay-at-home order.

“I love that @BrunoMars has a song called 'Locked Down with Kevin.' Time for some popcorn in Cali,” Bacon tweeted.

When not keeping things lighthearted, Bacon has been very vocal about getting people to stay at home to curtail the spread of COVID-19.

Earlier this month, Bacon launched a social media campaign to encourage people around the world to share who they were staying home for amid the outbreak. 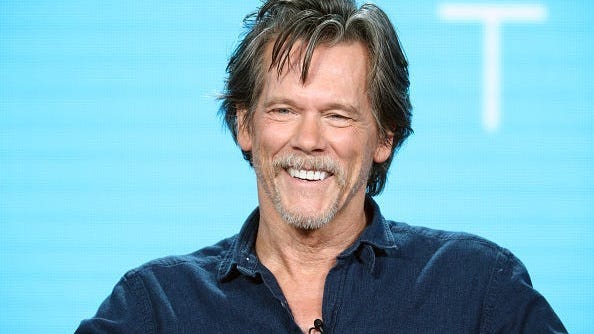 The campaign played off the widely popular game 'Six Degrees from Kevin Bacon' to show that we are only six degrees from one another and how important it is to keep each other safe.

Entitled #IStayHomeFor, the campaign asks people to take a video or photo of themselves with a sign explaining who they are staying home for and tagging 6 other friends to participate.

Bacon started it off with his own video which showed him holding up a sign that read, "#IStayHomeFor Kyra Sedgwick."

Hopefully, he helped his wife pick up some of the popcorn too.