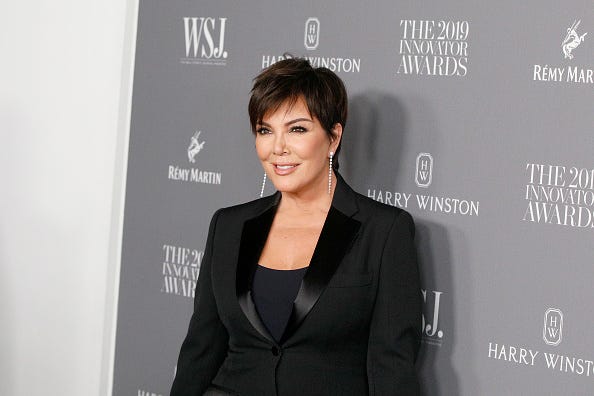 Kris Jenner, has what in her house?

The “Keeping Up with the Kardashians” star has revealed she possesses a very realistic life-size wax sculpture in her own image that she keeps propped up by the bar inside her Calabasas home. Run!

Jenner shared a clip of daughter Kim Kardashian’s reaction after feasting her human eyes on her mother’s inanimate doppleganger for the first time.

“Oh my God. This is so crazy and real,” the 39-year-old can be heard saying as she approaches the figure. “This is insane.”

After disclosing she was gifted the figure by the Hollywood Wax Museum, the 64-year-old joked that her reasoning for having it was “so you can visit with me without having to hear me talk to you.”

Afterwards, Kim gave her fans an up close look at the momager’s replica, which was decked out in Jenner’s favorite black sequined Dolce and Gabbana tuxedo.

“Like, it’s exact, down to the little mark she has,” the KKW beauty mogul said as she felt the mannequin’s face in a clip posted to her Instagram Stories. “Like, everything about it, you guys. This is her exact hairline.”

Despite being in astonishment of the work involved in recreating her mother’s likeness, Kim also acknowledged the uncanniness was a bit frightening.

She added: “I can’t even tell you how creepy and amazing this is.”

Fans that don’t have the luxury to be invited to Jenner’s home can see a similar version of the eerily accurate statue at Madame Tussauds in New York.

Back in May, the mother of six attended the unveiling of her waxen twin decked out in the same glittery tux.

“How amazing is this!?” Jenner tweeted images alongside her double and a replica of daughter Kourtney Kardashian. “Me, Kourtney, Kim, Kylie, Khloé and Kendall will all have our wax figures together for the first time. “