Watch our Audacy Live with BTS
By Johnny Lopez

May the force be with your holidays.

Disney+ is getting into the yuletide spirit by traveling to a galaxy far, far away via the upcoming “LEGO Star Wars Holiday Special,” according to USA Today.

Using animated LEGO versions of the franchise’s iconic characters, the project is inspired by the cult favorite “Star Wars Holiday Special” that aired on CBS back in 1978.

The new update follows the events of the 2019 film “Star Wars: The Rise of Skywalker” and will reunite Rey, Finn and Poe to celebrate the Wookie holiday of Life Day.

The storyline features Rey and BB-8 setting off on a time-travel adventure that will have them interact with Luke Skywalker, Darth Vader, Obi-Wan Kenobi, Yoda and other classic characters from the various "Star Wars" films. 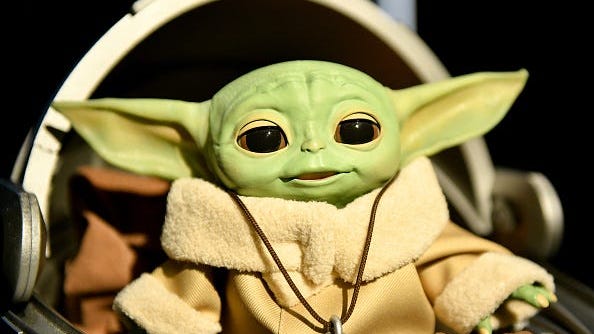 “It's a celebration of the saga,”executive producer Josh Rimes told the outlet. “A lot of characters will be interacting with different characters and perhaps even different versions of themselves at different ages.”

The special, which was inspired by holiday films like "It’s a Wonderful Life,” “Planes, Trains and Automobiles,” and “Christmas Vacation,” is 45 minutes long and will be available on Disney+ starting on November 17.

While Rimes hopes the “LEGO Stars Wars Holiday Special” will eventually become a holiday classic, for now he wants it to provide some seasonal cheer amid the ongoing pandemic.

“It'll bring a little joy to this world in this very, very crazy year we're having,” he added.

Fans won't have to wait until the holidays for another highly-anticipated Disney+ offering.

You’re in for a wild ride. Start streaming Magic of Disney’s Animal Kingdom, an Original Series from @NatGeo narrated by @joshgad, September 25 on #DisneyPlus. pic.twitter.com/eonLzD8JN4

The streaming platform announced they will be launching the National Geographic series "Magic of Disney's Animal Kingdom" on September 25th.

The eight-part series will give viewers an inside look at the Orlando, Florida theme park and will be narrated by "Frozen" star Josh Gad (Olaf).

“Magic of Disney’s Animal Kingdom captures the spirit of these two world-famous parks and its animals and ushers that feeling directly into viewers’ living rooms,” said Gad in a statement. “Each episode, we get to know these animals intimately and are immersed in the magic of Disney, and it’s been a joy giving voice to this ultimate adventure.”