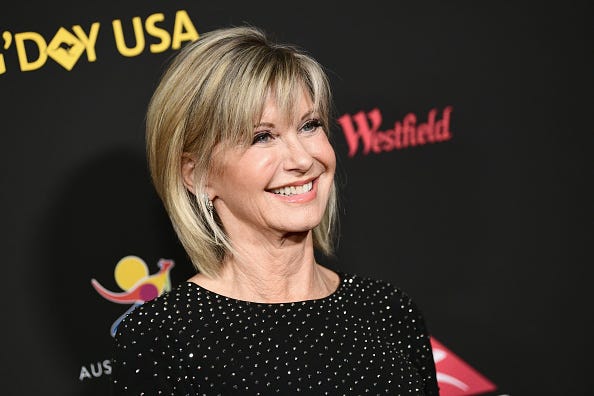 Olivia Newton-John isn’t letting cancer get the best of her.

Newton-John is a two-time cancer survivor after being diagnosed first in 1992 and again in 2013. Then, in 2017, she was told that the cancer had spread to her bones. But the “Grease” star doesn’t see the diagnosis “as a battle.”

People reports that while attending G’Day USA in Beverly Hills, California, Newton-John said, “I’m winning over it well and that’s how I see it, I don’t think about it a lot, to be honest. Denial is a really good thing, and I’m getting stronger and better all the time! I’m doing well!”

Longtime friend and former costar John Travolta was also present at the event, and couldn’t help but reveal how Newton-John has inspired him with her positivity. “Olivia is a survivor and she’s smart and she’s got a lot of life in her and I think she looks at it from the glass half full always,” he said.

“That’s her beautiful, natural approach towards life and I think we all need to do that,” he continued.

In September of 2019, Newton-John spoke with Gayle King on CBS This Morning where she revealed that the statistics of the disease don’t scare her. “I’m gonna live longer than that. I’ve made that decision. And I don’t buy into the statistics ‘cause I think they can make you really nervous,” she said.