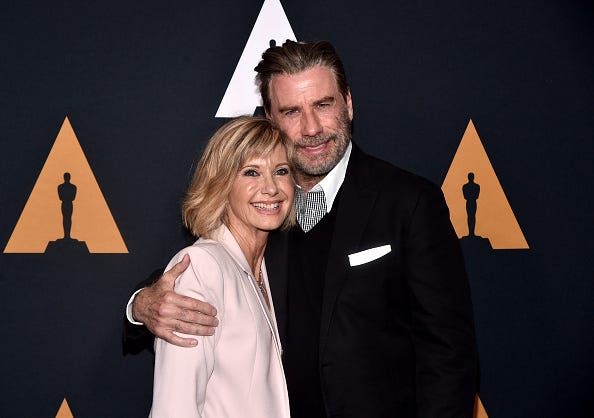 You’re the outfit that I want!

Olivia Newton-John is giving “Grease” fans the chance to buy the iconic ensemble she wears at the end of the 1978 movie. Tell me more. Tell me more!

The black leather jacket and skin-tight black pants she donned to sing “You’re the One That I Want” and “We Go Together” in the hit musical film are just two of more than 500 items that will be up for sale as part of “The Property From the Collection of Olivia Newton-John” auction on November 2nd, according to The Hollywood Reporter.

Enjoy this overview with Olivia Newton-John about our “Property From The Collection of Olivia Newton-John" auction taking place in Beverly Hills and live online on Julien's Live on Saturday, November 2nd! #OliviaNewtonJohn #Exhibit #Auction #Greasehttps://t.co/x8ScQbdB07

“I’ve had the thought of auctioning the jacket for the last 10 years, and when we started talking about it, the whole world opened up,” the 71-year-old said about deciding to give away her merchandise. “I’d only been thinking about the jacket and pants, but it also occurred to me that, heck, I can’t take this stuff with me. It should go to people who will enjoy it.”

The sale will include other bits of Hollywood memorabilia such as boots the actress wore in “Xanadu,” a minidress from her “Physical” music video and even one of the jackets from the Pink Ladies in “Grease.”

She added: “I’ve saved a lot of things over 40 years — not just costumes, but also Vegas outfits and tour outfits, my first saddle and bridle. It’s been a really fun journey putting this all together.”

The “Hopelessly Devoted to You” singer also reached out to her former co-star John Travolta who donated one of his personal airplane pilot hats, in addition to autographing a “Grease” script and lyric sheet.

But of all the items on the block, the “Grease” outfit is expected to fetch the most with organizers believing the jacket alone could go for as much as one million dollars.

“This costume is an incredibly important piece of pop-culture history, and Olivia has taken great care of it, keeping it in climate-controlled storage, so it’s in excellent condition,” said the executive director of the auction.

A portion of the proceeds from the auction will go to the public hospital the actress started in 2014, the  Olivia Newton-John Cancer Wellness & Research Centre in Melbourne, Australia.

Newton-John was first diagnosed with breast cancer in 1992 and is the midst of her third battle with the disease.

Despite her health struggles, Newton-John is maintaining a positive attitude and continues to express gratitude for her life.

"I'm so lucky that I've been through this three times and I'm still here," she told CNN. "I'm living with it. Every day is a gift now, particularly now."

“The Property From the Collection of Olivia Newton-John” auction will take place in Beverly Hills on November 2nd.