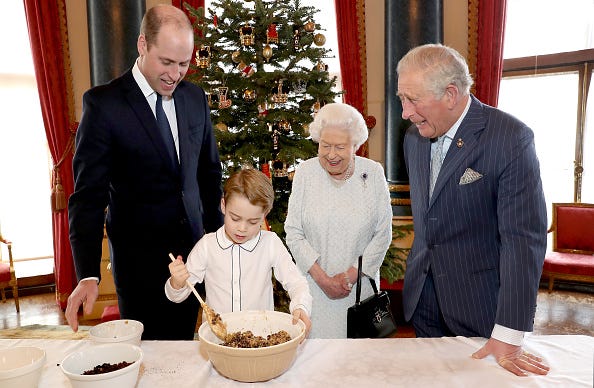 Queen Elizabeth is enlisting three of her heirs to help her make the desserts for Christmas day!

In an adorable photoshoot, Kate Middleton’s eldest child, Prince George, can be seen stirring the mixture for a Christmas pudding alongside his father, Prince William, and his grandfather, Prince Charles. They did it as part of a new initiative by the Royal British Legion.

The group gathered to create a series of four different Christmas puddings, per a tradition that supposedly brings good luck. The puddings will act as centerpieces at the Legion Christmas gatherings in 2020 as part of their Together at Christmas initiative.

The initiative provides the Armed Forces community with extra support around the holidays.

The royals posed for a few candids for royal photographer Chris Jackson, then joined five veterans for a group shot of the event. The baking took place in front of a fully decorated Christmas tree. 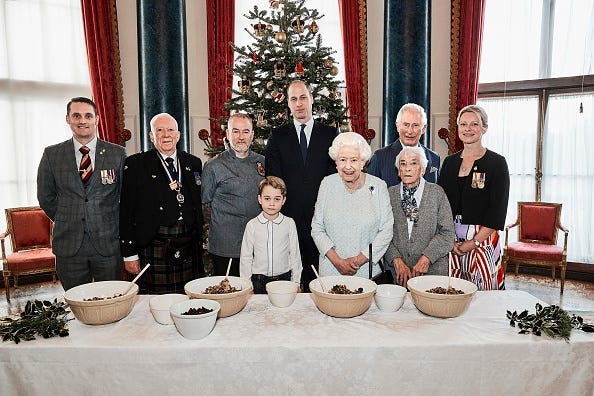 The Royal British Legion’s Director General, Charles Byrne, said, “Bringing people, families, and communities together lies at the heart of the Legion’s work and has done since we were founded in 1921,” People reports.

This isn’t the first baking venture the royals have tackled this holiday season. Last Monday, Kate Middleton appeared on a Christmas special with famed TV baker Mary Berry. It was during this special that Middleton revealed she makes her kids’ birthday cakes from scratch.

“I love making the cake,” she revealed. “It’s become a bit of a tradition that I stay up ‘til midnight with ridiculous amounts of cake mix and icing and I make far too much. But I love it.”