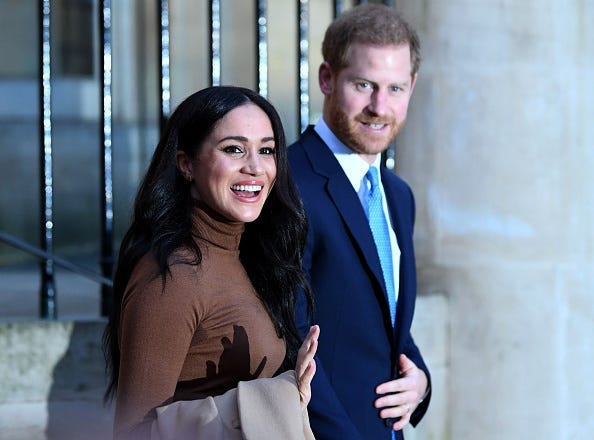 After recently spilling the beans about the less-than-fantasy life of growing up royal on Dax Shepard’s podcast, Prince Harry can get back to happier memories, as today marks his third anniversary to Meghan Markle.

But, in his comparatively humble way, on Friday, Harry will be launching his new docuseries, “The Me You Can’t See,” made in conjunction with increasingly close pal, Oprah Winfrey. After her attendance at their wedding, and that explosive sit-down interview with the talk show queen, fans were not shocked that the couple ended up moving to Oprah’s home base, Montecito, California.

“The Me You Can’t See” centers on mental health, and reportedly will delve into Harry’s own struggles. As Harry says in the trailer, "To make that decision to receive [mental health] help is not a sign of weakness. In today's world, more than ever, it is a sign of strength."

One might see this whole moving to Cali and making movies with Oprah thing as definitive proof that this royal family will be going to more movie premieres than fox hunts. Which would have been hard to imagine just two years ago when on May 6, 2019, Meghan gave birth to baby Archie, and the couple seemed to be settling into the opulent existence of the Susexes.

That all changed in January, 2020, when the pair announced they’d be stepping down as working members of the royal family. Reportedly due to the stresses brought on by the infamously invasive British press, it also appears Harry might have had some movie mogul dreams simmering inside.

According to GMA, the relatable royals have signed lucrative development deals with Netflix and Spotify, are working on a children's book, have taken on various charity roles, and launched Archewell, the organization that oversees their nonprofit work as well as their audio and production ventures. Not to mention those headline-grabbing podcast and TV interviews they manage to slip in there.

If they seem very busy for people who claim to abhor the spotlight, it might be because they are expecting their second child, a daughter, and once she comes around, the two might have to truly settle down for a spell.