Regis Philbin has been laid to rest at University of Notre Dame, his alma mater.

Family and friends said goodbye to the legendary television host and entertainment icon on Wednesday at Cedar Grove Cemetery on the campus of the university in South Bend, Indiana.

A school spokesperson told FOX that a private service was held at the school's Basilica of the Sacred Heart.

"Regis was laid to rest at his beloved Notre Dame, following a private ceremony on Wednesday. Again, our family would like to thank everyone for the incredible love and support you've given us and for the hilarious tributes and touching memories you've shared," the Philbin family said in a statement to PEOPLE on Friday.

"If you'd like to honor Regis, we again kindly ask that you make a donation either to www.FoodBankNYC.org or to the Center for the Homeless in South Bend (www.cfh.net)," they family continued.

Philbin passed away on July 24 at the age of 88 from heart failure.

The former “Who Wants to Be a Millionaire” host graduated from Notre Dame in 1953 with a sociology degree.

“The Philbin family wanted to bring Regis back to the place he loved so much for a private funeral and burial. That occurred on Wednesday, and he is now resting in peace at Notre Dame," school spokesman Dennis Brown said in an email to FOX. 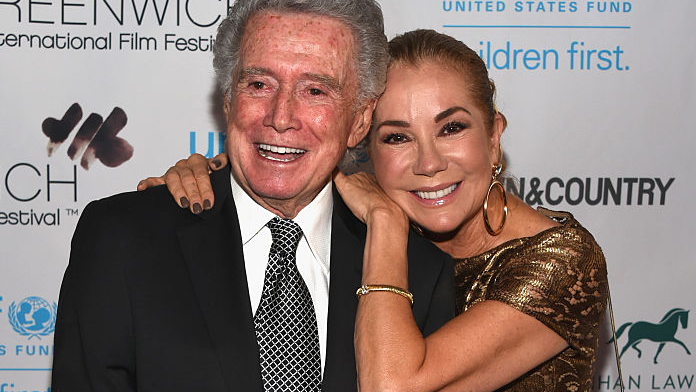 Philbin was also a Notre Dame sports superfan and enthusiastically supported the school over the years by attending games, rallies, banquets, and more, the South Bend Tribune reported.

He donated a generous $2.75 million in 2001 to create the Philbin Studio Theater, a performance art venue for creatives on campus.

"Regis regaled millions on air through the years, oftentimes sharing a passionate love for his alma mater with viewers. He will be remembered at Notre Dame for his unfailing support for the University and its mission, including the Philbin Studio Theater in our performing arts center," Notre Dame President Rev. John I. Jenkins, C.S.C., said in a statement following his death.

"He likewise was generous with his time and talent in support of South Bend’s Center for the Homeless and other worthy causes. Our prayers are with his wife, Joy, and their daughters and Notre Dame alumnae Joanna and J.J.,” the statement concluded.