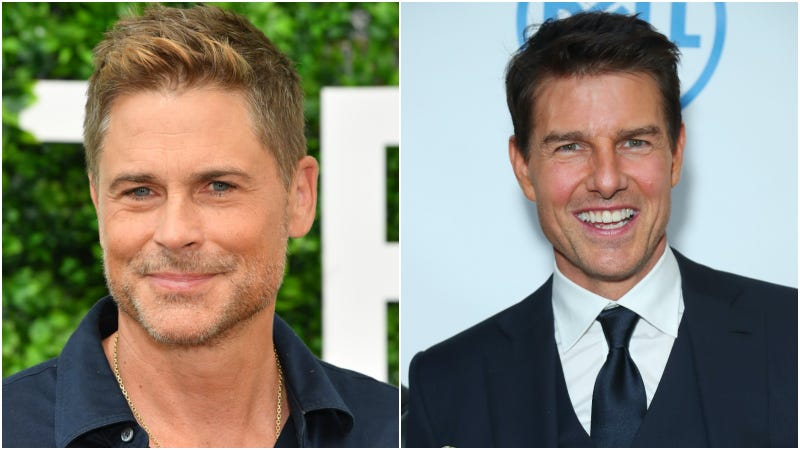 Two ‘80s hunks are better than one.

Rob Lowe searched through his amazing photo archives and shared an awesome throwback photo from a double date with his “The Outsiders” costar Tom Cruise in the early 1980s.

“Double date 1980s style!” the 57-year-old captioned the snap. “I think this might’ve been the premiere of ‘The World According to Garp.’”

In the pic, Cruise sports sideswept bangs and is decked out in a blue blazer, shirt and tie. Lowe kept it ‘80s chic in a white blazer, pink shirt and a low slung white tie. “Miami Vice” is shook!

Lowe was joined by “Little House on the Prairie” star Melissa Gilbert, while Cruise posed next to actress Michelle Meyrink, who also appeared in the 1983 film “The Outsiders.”

According to Today, the photo of the classic outing was not taken at “The World According to Garp” premiere, but at a screening of the 1982 TV movie “In The Custody of Strangers.” Emilio Estevez, who appeared with Lowe, Cruise and Meyrink in “The Outsiders,” starred in the television film.

The post caught the eye of many of Lowe’s nearly 2 million followers, including his younger brother and fellow actor Chad Lowe.

The 53-year-old ribbed his sibling by commenting, “You sure this wasn’t your prom?”

“The Outsiders” was released in 1983 and featured a cast of up-and-coming stars. Besides Lowe, Cruise and Estevez, it also starred Matt Dillon, Patrick Swayze, Ralph Macchio, Diane Lane and C. Thomas Howell.

In 1990, Fox launched a television version of “The Outsiders” with David Arquette and Billy Bob Thornton. The series was canceled after 13 episodes.