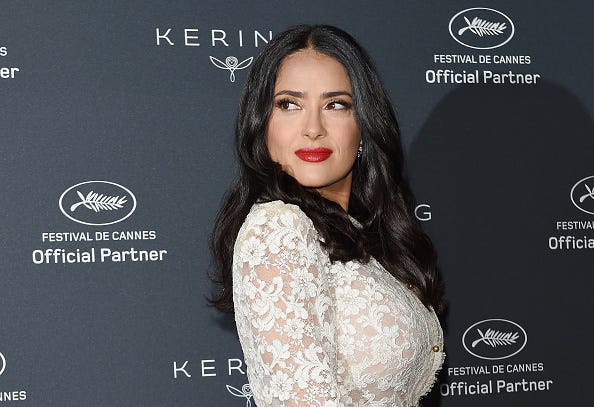 Salma Hayek is indulging in her animal side while on vacation.

The 53-year-old flaunted her flawless physique in a red and pink bikini as she laid on a grassy patch on the beach with a turtle, reported the Daily Mail.

The “Frida” star posted several makeup-free snaps in her stunning two-piece where she expressed her love for the adorable reptiles.

“I like #turtles on the beach,” she captioned the first pic and included a Spanish-language translation. “Me gustan las tortugas en la playa.”

After realizing she had not included a turtle in the shot, she thankfully gifted the world another pic of herself in a bathing suit, this time with a tortoise at her side.

“Oops... I posted the right caption but the wrong picture without the #turtle,” she commented on the second photo. The Oscar-nominated actress then derided her Instagram skills by including the hashtag, “#ISuckAtSocialMedia.”

While it’s unclear where Hayek was spending her time off, the in-demand star had her successful career on her mind as she also shared a trailer for her upcoming film “Like A Boss.”

“Happy #Halloween To celebrate, here’s a different shade of #LikeABoss 😈 💄,” the mother of one captioned the post.

The comedy, which hits theaters on January 10th, features Tiffany Haddish and Rose Byrne as best friends who run a makeup company together and enlist the help of a duplicitous cosmetics titan played by Hayek.

2020 is turning out to be quite the busy year for the Mexican-born star as she’ll also appear in the drama “Molly” with Javier Bardem and Elle Fanning and has a major role in the upcoming Marvel film “The Eternals” co-starring Angelina Jolie and Kit Harington.