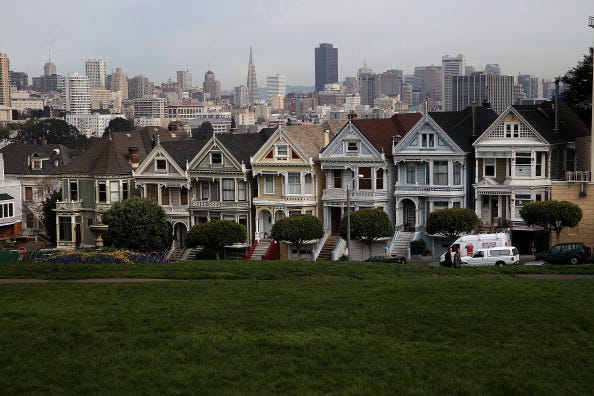 Have you always dreamt of living next door to the Tanner/Fuller family? Here’s your chance!

One of the historic homes on San Francisco’s “Postcard Row” is up for sale, and it could be yours if you have a few million collecting dust in the bank.

The Victorian building, located in Alamo Square, is one of only seven homes known as the “Painted Ladies.”

The charming three-story home dates back to the 1890s and comes with 2,588 square feet, three bedrooms, two and a half baths, and a two-car garage, according to SF Gate.

However, there are a few downsides of owning one of TV’s most recognizable homes.

For starters, it neighbors the home used for exterior shots of the hit 80s sitcom, “Full House,” and the current Netflix reboot, “Fuller House,” which means there’s a high volume of foot traffic from tourists clamoring to take photos in front of the iconic home.

It also boasts a hefty price-tag for a “fixer-upper” at a little under $3 million dollars. Have mercy!

The home, which was converted into two units in the 1960s, needs a lot of TLC. The remodeling alone might set you back upwards of $500K, CNBC reported according to Remodeling Magazine’s Cost vs. Annual Report.

However, once you get the house looking like a million bucks, its value will likely be as high as some of the hills in San Fran.

For a little comparison, Deadline reported that the actual “Full House” home, which is more than 1,000 square feet larger, was listed at almost $6 million in 2019 by the show’s creator and former executive producer, Jeff Franklin.

He bought it in hopes of turning the home into a homage for the series and remodeling it to reflect the show’s floor plan, but his plan was eventually shut down by neighbors.

In 2016, the as-seen-on-TV home sold for $4 million after being on the market for two-and-a-half months, according to MarketWatch.

news
Will you still need to wear masks at chains like Walmart and Target? This is where 15 major retailers stand
music
Tracee Ellis Ross responds to ‘Black-ish’ coming to an end next season: ‘It’s gonna be a good one!’
<img onerror="this.onerror=null; this.src='https://images.radio.com/aiu-media/og_775x515_0.jpg'; this.srcset=this.srcset.replace(new RegExp(this.srcset.split('?')