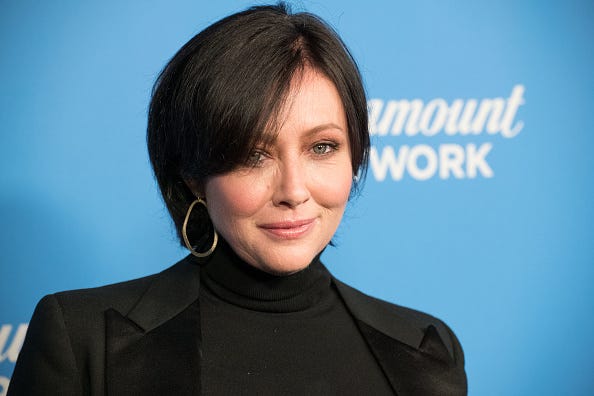 After a brutal breast cancer battle, Shannen Doherty has just revealed that she has stage IV cancer, three years after going into remission.

The ‘90210’ star appeared on “Good Morning America” Tuesday morning to share the news of her condition. “It’s going to come out in a matter of days or a week that I am stage 4. So my cancer came back. And that’s why I am here,” she said. “I don't think I've processed it. It’s a bitter pill to swallow in a lot of ways."

Doherty has been candid about her battle with breast cancer since her initial diagnosis in 2015, documenting her struggles on social media. This time, she kept the news to herself for a while and returned to the "90210" set in an effort to prove that she was still able to work.

"One of the reasons, along with Luke, that I did '90210' and didn't really tell anybody because I thought, people can look at that other people people with stage four can work too. Like, you know, our life doesn't end the . minute we get that diagnosis. We still have some living to do," she said.

Doherty is currently facing an ongoing civil battle with State Farm over the state of her home following last year’s wildfires. The fires just about destroyed her home, and she now faces a battle trying to get State Farm to cover some of the damages. Fearing that her cancer diagnosis may come out in court documents, Doherty decided to be open about her condition.

"We empathize with Ms. Doherty's health issues and wish her a full recovery," State Farm said in a statement. "We strongly believe we have upheld our commitment to our customer and have paid what we owe in this claim. We are prepared to defend our position in court."