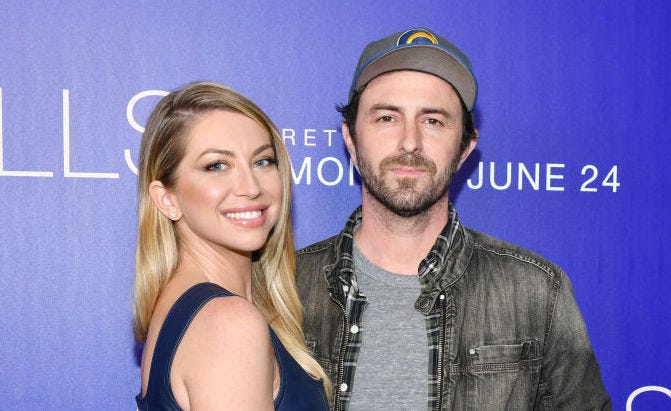 Does anyone hear wedding bells? Stassi Schroeder and her fiancé Beau Clark are showing off their glamorous new engagement photos.

After revealing on her RADIO.COM Original podcast, “Straight Up with Stassi,” that she got engaged in a cemetery back in July, fans have been patiently awaiting the undoubtedly beautiful photos that would come along.

Schroeder and Clark are continuing on the trend of unlikely engagement event locations. People revealed the photos, which were set in a West Hollywood hotel suite. “The thing we love doing the most together is traveling and feel like we spend most of our time in hotels – so we thought it was a good way to capture who we are as a couple,” Schroeder tells People.

Schroeder also reveals that the goal of the shoot was to meld their respective classic and eclectic looks together as well as their “weirdness and individual quirks.”

A few photos in the series show the couple lounging around surrounded by tons of their favorite items – shoes and clothes for Schroeder, and books and jerseys for Clark.

What photoshoot would be complete without a cameo from the couple’s furry friends? “We also brought our babies, Luda and Refund, who are literally Victoria’s Secret models,” Schroeder shares.

Along with the photos, the “Vanderpump Rules” star shared some other must-know details about the wedding. “We have hired wedding planers and have chosen the location – it is going to be in Rome, Italy,” she reveals.

For more from the star, check out “Straight Up with Stassi” by downloading the RADIO.COM app.