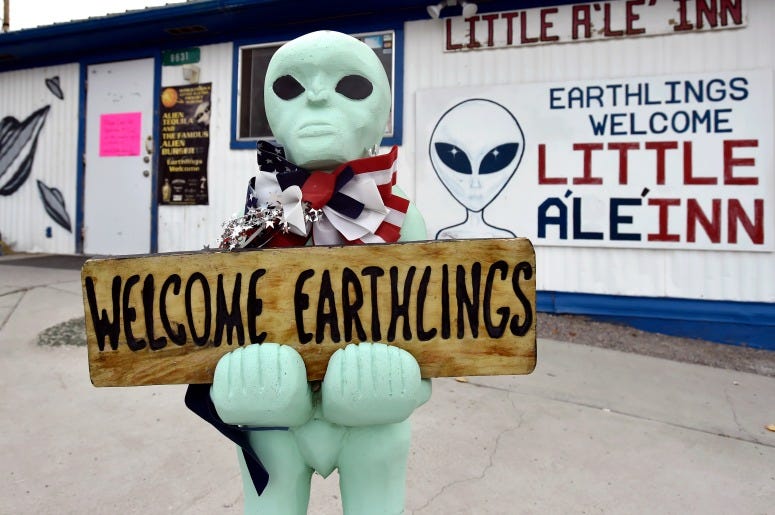 Alienstock, the festival thrown together in an attempt to capitalize on the viral, Storm Area 51 Facebook event, has been cancelled.

Perhaps it was a lack of permits, or the threats from the people of Rachel, Nevada, but organizer Matty Roberts has decided to end plans for the extraterrestrial enthusiast event, at least as it was originally scheduled.

"Due to the lack of infrastructure, poor planning, risk management and blatant disregard for the safety of the expected 10,000+ AlienStock attendees, we decided to pull the plug on the festival," Roberts said in a statement to FOX5 in Las Vegas. Roberts likened the event to a potential “Fyre Festival 2.0,” a possible repeat of the disaster in the Bahamas that has now become the standard for events gone wrong.

“We foresee a possible humanitarian disaster in the works, and we can’t participate in any capacity at this point.”

It all started as a social media joke, inviting people to meet up and attempt to “move faster than their bullets” to “see them aliens” at Area 51. With over 2 million people on-board, creators looked to move the momentum into a more peaceful and legal gathering, creating Alienstock for the same September weekend as a “meeting place for all the believers." As they noted, “they can't stop us from gathering and celebrating Aliens!”

Organizers attempted to raise funds for the event, as the people of Rachel took a stand. “They threaten to ‘take over Rachel’ and claim that the residents are ‘on board.’ The residents were not asked and are not on board and will certainly not allow their town to be taken over,” the town warned on their website. “Law enforcement will be overwhelmed and local residents will step up to protect their property."

The statement from Roberts goes on to say, that while the partnership in Rachel has ended, there still is hope for alien lovers in the city of Las Vegas.
“The relationship has ended permanently, and AlienStock will be moving to a safe, clean secure area in Downtown Las Vegas as an alternative,” writes Roberts.

“It’s grown into much more than a location. It’s a phenomenon that can only promise absolute safety and peace, and we need to move the Festival to guarantee that. Stay tuned for more news... it’s BIG!”