Candy Couser, a five-year veteran of the animal sanctuary, was hospitalized after a tiger nearly tore her arm off.

Baskin told USA Today in an email that Couser went to feed a tiger named Kimba. She noticed he was locked in a separate area from his usual feeding spot and called a coordinator to ask why he was moved.

She then proceeded to open a door that was “clipped” shut, which is when the tiger “grabbed her arm and nearly tore it off at the shoulder.”

Baskin explained that when a door is “clipped shut,” it is the sanctuary’s “ universal signal NOT to open a gate without the coordinator coming to assist.”

“But Candy said she just wasn't thinking when she reached in to un clip it," she said, adding, "It is against our protocols for anyone to stick any part of their body into a cage with a cat in it."

The outlet noted that one employee recalled seeing the arm "barely attached and holding on by a little bit of skin underneath.”

Fellow volunteers heard the commotion and came to assist, including a nurse who attempted to stop the bleeding. Another called for an ambulance. 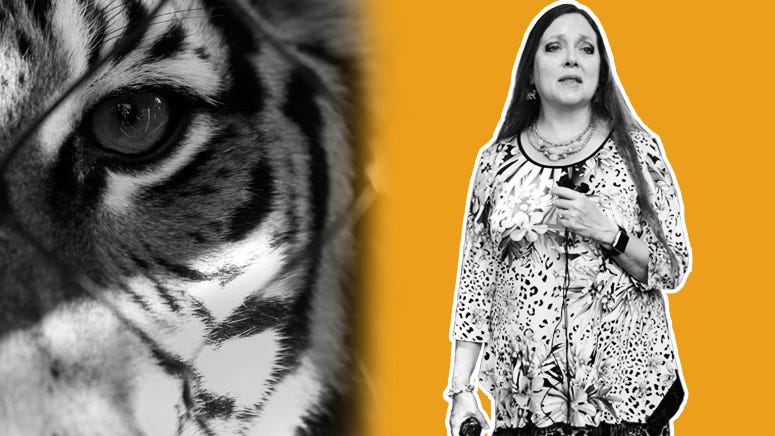 Why do we keep watching Carole Baskin?

According to Baskin, Couser “insisted that she did not want Kimba Tiger to come to any harm for this mistake.”

Paramedics arrived roughly 20 minutes after the incident and treated the injury on the scene, according to Hillsborough County Fire Rescue PIO Eric Seidel. Couser was then transported to the local hospital for further treatment.

The outlet notes the staff and volunteers met later in the day to discuss what happened.
Baskin reportedly thanked everyone for their quick reactions.

"You guys did amazing, absolutely amazing. Thank you so much, because you probably saved her life," she said. "And you may have saved her arm. So thank you for being here and doing that... I know everybody feels really bad about this because we all love Candy so much and she's such a sweet person."

The sanctuary is currently closed mainly due to the COVID-19 pandemic but also partly because of negative attention brought on as a result of the “Tiger King” documentary on Netflix.

Baskin revealed the tiger will be placed into quarantine for a month-long period as a precaution, but assures that the animal acted “normal due to the presence of food and the opportunity.”

However, Kimba’s future is in the hands of the CDC as the agency has the right to euthanize an animal that bites someone.