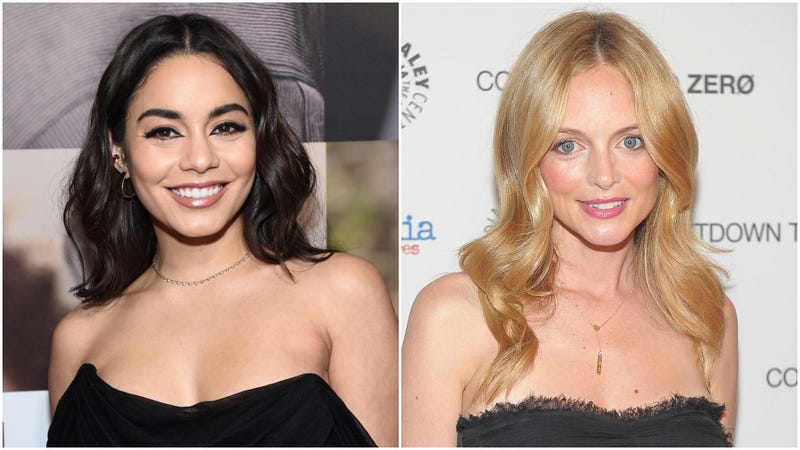 Vanessas Hudgens and Heather Graham are hard to miss as they treated themselves to a dip in the waters off the coast of Italy.

The two stars showed off their impressive physiques while cooling off at the beach during downtime from attending the Filming Italy Festival in Sardinia, Italy this week, DailyMail reports.

Vanessa Hudgens and Heather Graham showcase their incredible figures in skimpy bikinis as they frolic in the sea https://t.co/K9hzd2QyS2

Hudgens, 32, looked tanned and toned as she rocked a colorful, diamond-print bikini that showed off a belly-button piercing. The "High School Musical" actress smiled ear-to-ear in a seashell necklace and yellow bucket hat.

While Graham, 51, showed plenty of skin in a black string bikini that accentuated her striking figure.

Hudgens was later seen relaxing on a lounge chair while sipping on a fruity cocktail. The "Spring Breakers" star even stopped to take a selfie with an excited fan.

The two bathing beauties both radiated confidence as they laughed and enjoyed their day in the sea. The pair seemed to be living their best lives after being spotted together multiple times this week, the outlet noted.

Graham, who famously starred as Roller Girl in the 1997 film "Boogie Nights," later took to Instagram to show off her toned figure while posing on top of rocks in a cheetah-print bikini in front of a gorgeous Italian backdrop.

Perhaps the two actresses have bonded over their love of hiking.

In May, Hudgens took to Instagram to show off her toned legs and abs while wearing a bikini during a daytime hike up a mountain. In June, Graham treated her fans to a selfie while spending the day at the Acadia National Park in Maine.

Graham is currently working on the Western film “The Last Son” where she will star alongside “Avatar” actor Sam Worthington and Machine Gun Kelly, DailyMail says. She will also hit the big screen in the horror movie “Oracle” alongside “The Underground Railroad” actress Lucy Faust.