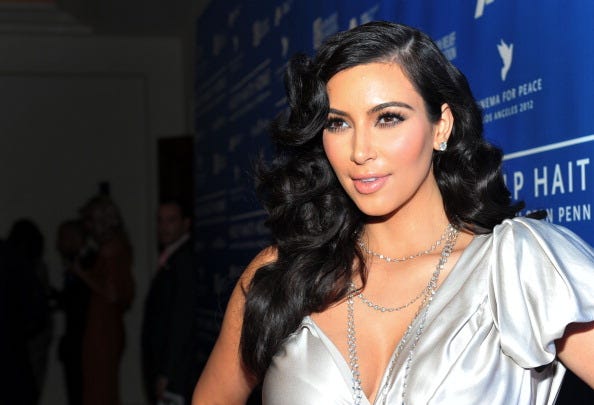 When it comes to raising kids, Kim Kardashian knows it’s all about the way you look at things.

The “Keeping Up with the Kardashians” star recently discussed how she’s able to keep her white home decor looking immaculate despite have four children under the age of seven.

Kim Kardashian's Daughter 'Wrote on' a Table with a Sharpie — but Kanye West Called It 'Art' https://t.co/B78OTpTEhU

“Their rooms are really festive and wild and everyone has a theme, so I let them go crazy in their rooms and the playroom,” the 39-year-old said during an appearance on “The Ellen DeGeneres Show.” “They respect the space everywhere else.”

But in the rare instances that one of her little ones misbehave, the mother of four disclosed she and husband Kanye West handle the situation very differently.

“I got this table made and Chicago took a Sharpie and wrote on the table,” she added.  “I was freaking out at first and then Kanye came home and was like, ‘It makes it even better, it’s art! We’re gonna keep this forever!’”

Although not fully convinced, the reality diva gave in to her husband’s interpretation, before she once again reiterated her stance.

Turns out scribbling on furniture isn’t the only way the Kardashian-West children take to acting out.

Kardashian also admitted she had to have eldest daughter North photoshopped into the family’s 2019 holiday card after the six-year-old refused to appear in the group shot.

While the photo features all four West children and their parents snuggled up on the staircase in gray and white sweatsuits, North’s snap was actually taken a day after the family posed for their picture.

“North was having a day, so she refused to be in the shoot. She just was crying because she wanted her specific hairstyle, whatever,” the KKW Beauty owner said.

But the following day, North changed her mind. Luckily, the reality star was able to secure the same photographer and with a little digital magic the festive image captured the united family unit.