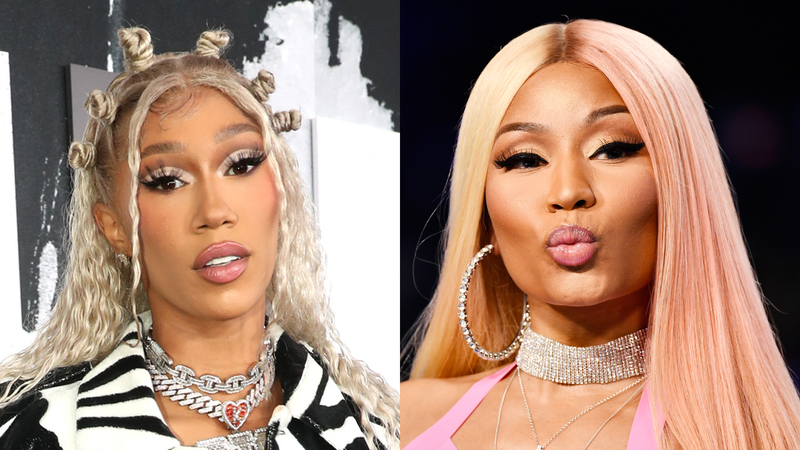 Alright let’s get right into it. During a a recent interview with Billboard, BIA spoke about her rise to fame as well as those that helped her along the way. Specifically, her “Whole Lotta Money (Remix)” collaborator, Nicki Minaj, who the Boston-born rapper said is on the same level as one of the GOATs — JAY-Z.

As far as BIA is concerned Nicki is one of the Hip Hop “greats,” and deserves to be treated as such.

“I always say to people, when you speak of Nicki, you got to speak on her like how you speak on JAY-Z and the greats that laid out the foundation for the people that’s after them,” BIA told Billboard, before bringing up “Whole Lotta Money” hitting the Top 20. “She broke amazing records and she’s made it easier for people like me to come through and do what we do. I’m always going to give her that credit and that respect because she helped me hit another milestone in my career.”

BIA also touched on the support she received from pop princess, lingerie empress and beauty mogul Rihanna. Who co-signed her Russ-assisted track “Best on Earth” on Instagram, and later tapped her to perform during her 2021 Savage X Fenty Vol. 3 Show.

About the IG shoutout from RiRi, BIA gushed — “This is like one of my favorite moments of my whole career and my whole life. It’s absolutely a full-circle moment. I love Russ. He’s such a great friend of mine, and I love Rihanna so much. She’s so top-tier of absolute taste level. For her to embrace my music and to also shine light on me as an artist, it’s just the biggest dream. I just love her, I’m so grateful.”