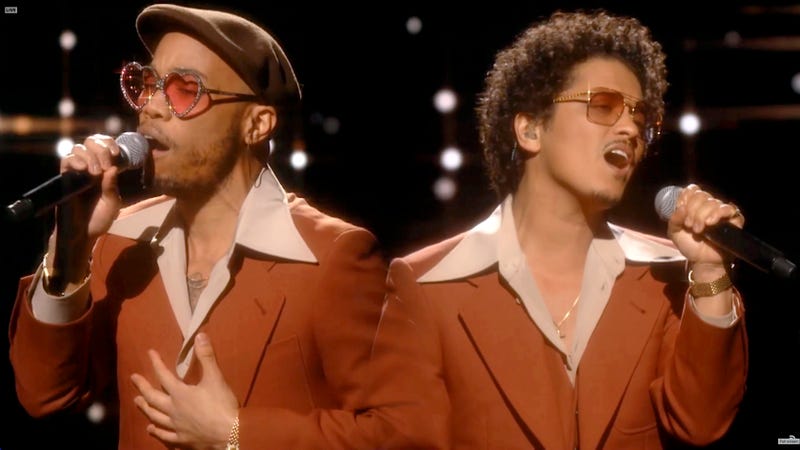 Things are about to get a lot smoother this November, thanks to the duo behind Silk Sonic.

Both Bruno Mars and Anderson .Paak have confirmed the arrival of a full-length debut album by Silk Sonic.

An Evening With Silk Sonic drops November 12 and features Boosty Collins as the record's “special guest host." The project will feature Mars and .Paak’s lead single “Leave the Door Open,” as well as “Skate,” and the “Silk Sonic Intro.”

Last February, Bruno, and Anderson debuted their retro-inspired Silk Sonic project and performed “Leave the Door Open” at the GRAMMYs just a few weeks after the arrival of their lead single.

During a conversation with Rolling Stone, in August, Mars revealed that an LP was in the works but noted that the release date was around January 2022. During the conversation, the “24K Magic” singer shared, “We’re really in touch-up mode now… We’ve got the bones of most of the album, so it’s really about touching up parts that need a little more… grease.”

.Paak shared that the delays on the project came from striving for perfection.

“We’re not there. We were there. We had some moments in the danger zone!” noted the Ventura crooner. “I think we put the pressure on ourselves by putting out ‘Leave the Door Open’ — but a deadline is important because, at some point, you gotta say, ‘This is it.’ Otherwise, you’re gonna work it till you hate it. But there’s a beauty in that — you do have to get sick of it, because that means you put the love and the time and the passion in it, and it’s taxing.”

However, now the album is arriving sooner than intended, coming in 2021, rather than their initial 2022 date. Last Friday, Mars shared the early release date on Twitter on his 36th birthday.