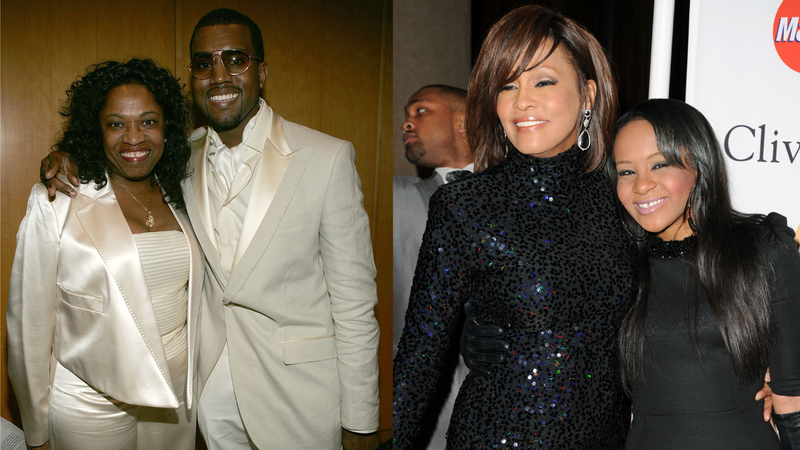 This is a musical love letter to the mom in your life. This Mother's Day, it's all about love, rhythm, blues with a healthy dose of rap. From the loving feels of Whitney Houston, Tupac's realness and Fantasia's ode to single moms everywhere, there's something for everyone.

So, whether you get to sing-along with your maternal figure IRL or plan on honoring her in your own special way, these cult classics and a few underrated tracks are perfect for your Mother's Day playlist.

Kanye West loved his late mother, Donda. He debuted this tribute to her on Oprah in 2005 and Donda loved it so much that she even made it her ringtone. In an interview about the song, West expressed, "My mother [is] my everything. When she first heard ["Hey Mama"], she was crying."

This mama-themed hit served as the foundation for 1997 classic, Soul Food. The film followed a family whose matriarch fell ill and how they coped. The song would be the band's last major run of the '90s. However, it will loving this song will always be food to our souls.

"My Love Is Your Love" - Whitney Houston

Co-writer of what many would consider to be Whitney's comeback hit, Wyclef Jean reflected on Whitney's relationship with her daughter, Bobbi Kristina. "The greatest memory for me was, as hard as she was working, she had her daughter in the studio. [...] Do you know how hard it is to be recording and your kid’s there? But when it came to her daughter, the rest of the world didn’t exist. [...] it really wasn’t about the comeback record. It was about making sure that her daughter was there with her, experiencing what she was experiencing. This is the Whitney that I know." Bobbi Kristina even had some adlibs on the song and that was the Whitney we loved.

After entering into the music world as a pre-teen, Jhené returned in her twenties with a new perspective and a toddler. Her daughter, Namiko Love with singer, O'Ryan, has been featured on two of Jhené's songs and as the child of two artists, Nami has even performed. We fully anticipate more from this adorable mother-daughter duo.

The '60s bop is all about a mother's advice. It's one of the first songs we get referencing those stern lessons and loving tidbits only a mother can provide.

Co-written by Babyface, this is Ashanti's way of honoring her mother/momager, Tina Douglas. Once she hits the bridge of the endearing ballad, we're sure there won't be a dry eye in sight.

The Kenneth Gamble hit was inspired by his mother, Ruby. The '70s soul classic peaked #6 on the Billboard R&B charts and charted for 13 weeks. The song was also recorded as one long track, but is often known for being two parts. It remains one of the band's biggest hits.

Bey brought in motherhood in the sweetest way— through song. The ballad to her firstborn closed out her surprise eponymous album in 2013 and the tender visual radiated with pure love as we see Blue stealing every scene she's in. Not to mention, her first feature where she's speaking was the cutest moment ever.

Fantasia's ode to single mothers is one of her most underrated singles from her debut album, Free Yourself. When the song was released, Fantasia was a teenage mother to daughter, Zion. The empowerment song begins with her singing, "It's about time we had our own song/Don't know what took so long..."

No Mother's Day playlist is complete without mentioning Pac's "Dear Mama." In a 1995 interview, he explains why he wrote the song— "I wrote it for my mama because I love her and I felt I owed her something deep." The iconic track is also the third song in hip-hop history to be placed in the Library of Congress.

WATCH MORE: How Mother's Day Came to Be in the U.S. and Around the World