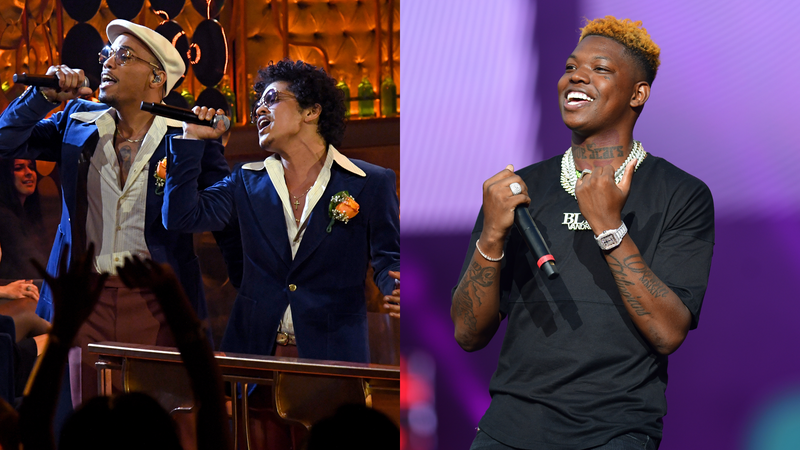 If they haven’t already, at least one if not all (we’re willing to bet all) 7 of these tracks will change your life for the better. Because whether these songs have already been added to your playlist and playing on repeat, or if you’re hearing about them for the first time, these are all go-to bops.

Featuring a mix of selections from both established stars and the next wave of new talent. Including Silk Sonics’ smooth and suave R&B sounds, WizKid and CKay’s Afrobeats, plus Yung Bleu with some Trap. These are the 7 Hip Hop and R&B songs you have to hear right now — but for real.

An undeniable bop (even before it’s remix with Justin Bieber), “Essence” became part of the emergence from shut down soundtrack. As despite it’s more lax vibes, the track and it’s contagious chorus plus feature artist Tems, is exactly what we all needed to get us dancing again.

Yes it blew up because of TikTok, but now we can’t get it out of our heads — not that we’d want to. Originally released in August 2019 by Nigerian producer, singer-songwriter CKay, “Love Nwantiti” has been followed up with many remixes since, and each one (but particularly this one) is a total vibe.

Between interpolating the melancholic piano instrumental from New Edition’s “Can You Stand The Rain” and tapping a current favorite Lil Durk, it’s hard to come up with a reason why wouldn’t want to hear this song. Not that we’re even gonna try because that would defeat the propose of what we’re doing here. As, for the visual that’s also lit, well dimly, if we’re being literal.

A certified standout on the deluxe version of his latest album A Gangsta’s Pain: Reloaded. “Scorpio,” has Moneybagg showing a new dimension to his sound, diving deeper into his own thoughts.

Despite arriving a decade later, “Sandman” part of the Live.Love.A$AP re-release, fits right into the mixtapes’s tracklist thanks to its heavily dosed Kelvin Krash and Clams Casino “cloud rap” production. And it’s getting us hype about his upcoming fourth studio album, which we don’t know much about, except for it tentatively titled All Smiles.

Sonically Yung Bleu and Kehlani sound right at home together on "Beautiful Lies." The song is fire from the jump, but when Kehlani enters the conversation for real it’s game over. Going through a break-up or need to be…? Then this is the song for you.

7 Silk Sonic - Smokin Out The Windo

The first song the undeniable duo of Anderson .Paak and Bruno Mars ever wrote together, “Smokin Out The Window,” according to Mars is “basically… about a man going through it, and you can hear him being emotional… saying some heinous things, but really he’s begging, begging for it back.” Infused with humor, suave dance moves, and buttery rich vocals it really hits the spot… EVERY spot.