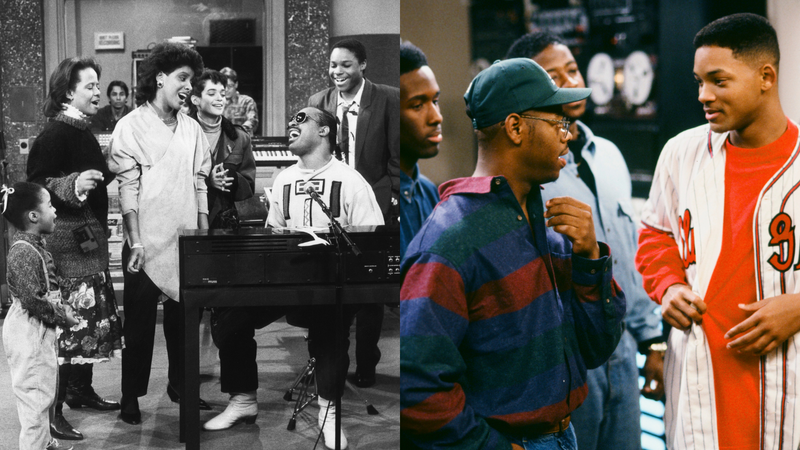 Before social media and in lieu of an extensive press run, Black singers and rappers would often gain buzz by appearing as a guest star on popular Black TV shows. These moments are some of the most cherished in the culture and often are the ones most discussed.

Remember when Tia and Tamera went to Freaknik in Atlanta on Sister, Sister and were serenaded by Mýa and Blackstreet? Or what about the time Ronald Isley had guest appearances on both The Jamie Foxx Show and The Steve Harvey Show? Or when Nikki Parker broke into Tweet's hotel room on The Parkers just to get her to sing at Kim's birthday party? Remember when Jon B. casually performed at Tia and Tamera's prom and Lena Horne made appearances on both The Cosby Show and A Different World? Yes, we're about to get into all of this with a highlight of some of our favorite musical guest appearances on classic Black sitcoms, in honor of Black Music Month.

Please note: this is in no particular order and since this wouldn't be complete without mentioning some of music's biggest stars who had recurring roles on these shows, we threw in a few honorable mentions as well.

The Notorious B.I.G. on 'Martin'

This is arguably one of the most notable guest appearances because Biggie acted as himself. He appeared on season 4, episode 3— the "Blow, Baby, Blow" episode. While in town looking for background singers, Biggie quickly realized that everyone is looking for their big break.

Boyz II Men on 'The Fresh Prince of Bel-Air'

Big talker Will found himself in a bind after promising the family that he could get Boyz II Men to perform at Little Nicky's christening, which also happens to be Christmas Eve. The famed quartet appeared on season 4, episode 13 entitled "'Twas The Night Before Christening," and performed their hits, "Let It Snow" and "Silent Night."

Mýa and Blackstreet on 'Sister, Sister'

This is a classic episode for a few reasons. First of all, Freaknik. In case you need a backstory, Freaknik (comprised of the words freaky & picnic) was an annual spring break festival held in Atlanta from 1982 until 1999. Tia and Tamera attended on Sister, Sister and while trying to win back Tia, Tyreke and Jordan ran into performers Mýa and Blackstreet. They performed their hit at the time, "Take Me There" from The Rugrats Movie soundtrack.

Stevie Wonder on 'The Cosby Show'

Every good story starts off with "you'll never guess who I ran into," but in the case of Theo and Denise, Stevie Wonder's limo actually ran into their car. To make up for the incident, the esteemed crooner asked the family to meet in his studio for a jam session. He also performed his ballad, "I Just Called To Say I Love You," alongside the show's leading lady, Phylicia Rashad as Claire Huxtable.

Heavy D & The Boyz on 'A Different World'

Any time Heavy D stepped on screen, it was special. On his season 3, episode 6 appearance, the rapper schooled the show's lead, Whitley Gilbert on range, poetry and not judging a book by its cover. When she realized what was happening, her expression was priceless.

'Moesha' had a slew of guest appearances— Ginuwine, Master P, Lil Kim, Johnny Gill, Xscape, Morris Day, DMX— just to name a few. However, on the very first season in episode 5, to challenge a discriminatory group, Kim and Moesha help to plan a last-minute fundraiser and Moesha snags Jodeci as the headliner. The quartet won the crowd over with their performance of "Get On Up."

During Destiny's Child quartet era, they appeared on popular sitcom, Smart Guy. The show starred Tahj Mowry, younger brother of Tia and Tamera Mowry of Sister, Sister. In season 3, episode 10 ("A Date with Destiny), TJ steals the spotlight when the girl group asks him to star in their "No, No, No" video, instead of his sister. The group also performed an a cappella version of "Amazing Grace."

Ron Isley portrayed a R&B singer-turned-pastor trying to not get his daughter played by Mary J. Blige to follow down the path of sin. They both appeared on season 2, episode 14 entitled "Papa Don't Preach." Mary performed her hit, "I Can Love You," alongside Jamie Foxx's character. Isley also performed on The Steve Harvey Show with the hit that could've been a real song, "When The Funk Hits The Fan."

Tupac on 'A Different World'

During Tupac's time, he was a well accomplished rapper and actor. So, who could forget the time he played his real-life best friend, Jada Pinkett Smith's on-screen boyfriend, Piccolo?

Max and Kyle's on/off relationship was one of the highlights of Living Single. However, during one of their spats, the group snagged some tickets to a Brian McKnight concert. Thanks to their incessant arguing, they got kicked out and temporarily broke up.

On every sitcom, the main character would do something outlandish and hilarious to garner the attention of a celebrity. On Season 4, episode 7 of The Parkers, Nikki (played by Mo'Nique) was unable to get tickets to see Tweet for Kim's 21st birthday. She and her best friend broke into Tweet's hotel room, told a white lie and got her to perform her song, "Oops (Oh My)."

Usher on 'The Parent Hood'

As the heartthrob of the '90s, Usher has recurring role on Moesha, but also played himself on Robert Townsend's The Parent 'Hood. When Zaria won tickets to see the crooner, but ended up being punished, he swung by her house for an intimate performance of "You Make Me Wanna."

Lady of Rage on 'The Steve Harvey Show'

The former Death Row artist, Lady of Rage is most known for her portrayal as Coretta, a fiery student who occasionally bullied Lydia (played by Lori Beth Denberg) and was completely smitten with Romeo (played by Merlin Santana).

Rhona Bennett of En Vogue on 'The Jamie Foxx Show'

During the later seasons of Jamie Foxx's hilarious sitcom where he showcased his various talents, he was joined by Rhona Bennett. Bennett took on the role of Nicole, Jamie's coworker at Jingles 2000 and their fictional characters even went on tour together.