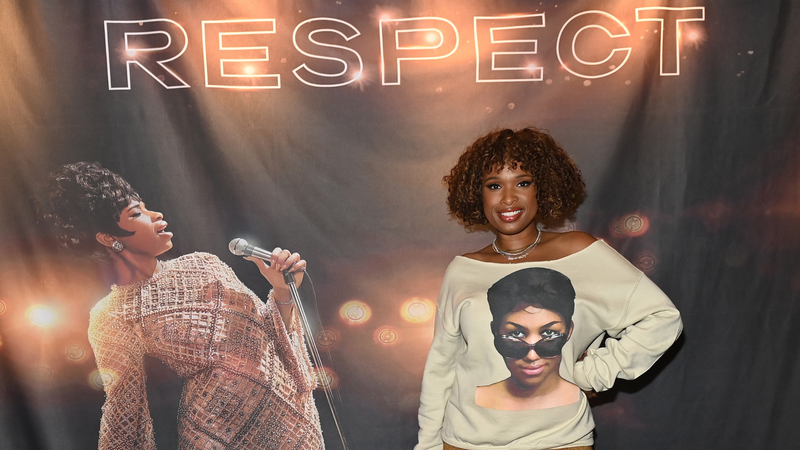 We know that Jennifer Hudson was handpicked by Aretha Franklin to portray her in the biopic we know now as Respect, but bet you didn't know this manifestation was 15 years in-the-making?

The GRAMMY and Oscar-winning artist spoke exclusively with Audacy's own Big Tigger and crew of The Big Tigger Morning Show to discuss Respect, takeaways, American Idol, what she would need to reprise her Sex and the City role, a potential VERZUZ showdown and who she'd like to see portray her in a biopic someday. Spoiler alert: find out why it could be Megan Thee Stallion.

"The time has finally come. I'm excited for the world to see it. I've waited for this for 15 years," she began. On meeting Aretha Franklin and now, portraying her in a film, Hudson is still on cloud 9, but it's also "a lot."

"It's already amazing when you get to meet somebody you idolize, that you look up to, right? That's enough. Then add that on top of it, her saying like 'I want you to play me.' Not to mention, it was my dream to play her. Add all of that up, it's beyond surreal. It's exciting, but it kinda makes me that more nervous because it makes it that more personal when it comes from the actual person and you know them," she explained.

As far as preparation goes, Hudson focused on the "era she grew up in." She explained, "knowing what it was like to be a woman during at that time. To understand how she existed, what the circumstances were in contrast to how I grew up— which were extremely different. Which played a huge role in the portrayal of her."

Because of the grandeur associated with Aretha Franklin, Hudson wants the audience to understand how human she was. "We know her as the icon, the legend and we will also celebrate that, but there was also a human—with a life— and we all go through things. The takeaway, for me, was finding your own voice because as soon as Ms. Franklin found her own voice and owned it, that's when we got our Queen of Soul."

When it comes to a future Jennifer Hudson biopic, the actress already has her short list of leads. She exclaimed, "Skye [Dakota Turner]," who plays Young Aretha in Respect. Also, Coco Jones and Megan Thee Stallion. Yes, you read that.

According to her son and his friends, Hudson and the "Savage" rapper favor each other. Hudson revealed, "when we met each other at the BET Awards, she said, 'I know we're supposed to be like sisters or something.' Sometimes, people think I'm her apparently."

Get into the full exclusive chat with Jennifer Hudson above to find out who she'd go against in a VERZUZ battle and what "Louise from St. Louis" would need to be Carrie Bradshaw's assistant again.

While we wait for the release of Respect (slated for August 13), check out Audacy's exclusive station, Sweetest Soul— dedicated to the pioneers of R&B.