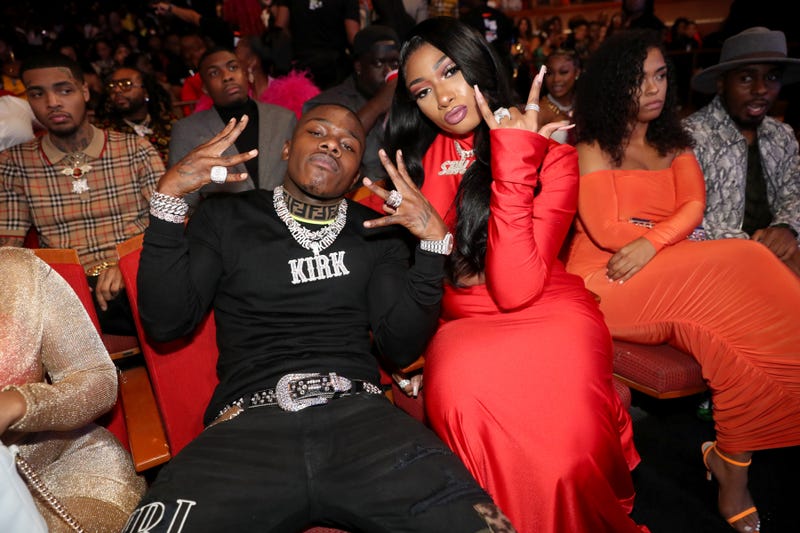 Megan Thee Stallion is calling out all the “very strange industry men” and is not standing for any wishy-washy support.

The “Savage” rapper called out DaBaby on Twitter after he retweeted a joke from a fan that referenced the shooting incident with Tory Lanez.

The tweet read, “I guess @DaBabyDaBaby and @torylanez cool now bc they shot somebody and don’t have to do no jail time.”

Megan promptly clapped back, standing up for herself, she wrote, “Support me in private and publicly do something different… these industry men are very strange.”

DaBaby defended himself by saying that the retweet from his account was a mistake. “Idk what type of Illuminati s*** Twitter got goin on. I ain’t retweet nothing but 'Ball If I Want To' promo. I ain’t retweet that silly s***. Then once ppl start tagging me & I saw it and tried to delete it and undo the retweet Twitter didn’t let me. Type s*** yall on?”

A few days after the Twitter debacle DaBaby dropped his collaboration with Lanez, called “SKAT.” Megan, who frequently collaborates with DaBaby responded to the new track, which lead to her and DaBaby going back and forth on Twitter.

She wrote, “This situation ain’t no damn ‘beef’ and I really wish people would stop down playing it like it’s some internet s*** for likes and retweets.”

DaBaby, who is featured on Megan’s “Cry Baby” track wrote that she was letting “these folks get the best of you thug.”

He added, “You know like I know I ain’t no ‘industry’ n****, let em fool you into thinking that you trippin. Stand on what you stand on without feeling like I’m against ya. Stay focused my g.”

The Houston rapper responded, “My stance hasn’t changed at all YOURS has. We already spoke abt this in private and you specifically said ‘that ain’t even no good business move why would I promote that s***’ but now this ain’t your ‘beef’? That ain’t real. But you stay on ya ‘business’ my g.”

“You ain’t tweeting nothing I ain’t tell dat n**** directly. I told him da same s***. lol Whoever cleared it cleared it, so what,” said DaBaby in reference to his new song with Lanez.

Ultimately the Twitter back and forth lead to Meg’s boyfriend, Pardison Fontaine stepping in to defend her and telling DaBaby not to address her again.

However, regardless of the drama these “very strange industry men” seem to stir up Megan is still serving up charting singles and reigning supreme. Her latest single “Thot S***” entered the top 10 on the U.S. Apple Music charts. The new single came with an explosive music video that is both politically and sexually unambiguous. The video takes a direct stab at conservative politicians who have spent copious amounts of time defaming her music.