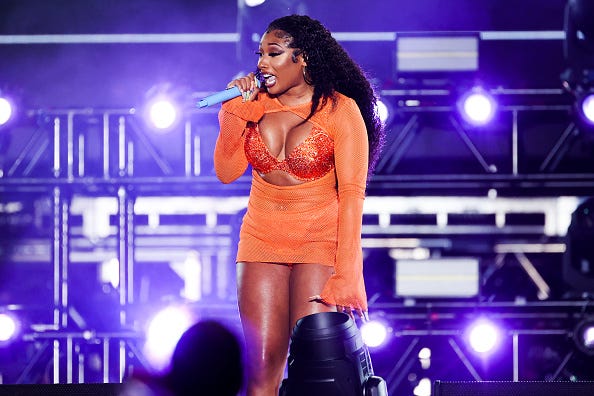 For fans who couldn’t make the festival, the “Savage” rapper took to Instagram to show off her looks and her extravagant weekend.

Debuting the glam that she wore for her festival set, Megan posted a photo modeling her structured, mesh, and leather-studded crop top and studded leather briefs and chaps. The top included a bustier silhouette and featured a matching studded leather choker.

Additionally, her weekend photo dump included a look at her detailed nail set, a selfie of Meg in a blonde wig, and moments where she is clutching major stacks of cash on stage. The post concludes with some performance photos and then finally, a sweet photo of her French bulldog, Foe Thee Frenchie.

As we all know, Megan’s rap game is impeccable, and now the GRAMMY-winner’s stature as a fashion icon is becoming prominent too. In 2019, she starred in a Puma campaign for the Cali Sport sneaker. In the Spring of 2020, she worked on a campaign with Fashion Nova.

Plus, the artist was featured in Rihanna’s Savage x Fenty lingerie summer 2020 campaign. In Spring 2021, Megan partnered with Coach to help promote a new collaboration with A Bathing Ape.

Finally, she has also teamed up with StockX for the Revlon x Megan Thee Stallion Hot Girl Sunset Collection via DropX….and she starred in an Ambush X Nike campaign.

For all of your favorite female rappers in one place, check out Audacy's Women of Hip Hop exclusive station. Tap in with Saweetie, Megan Thee Stallion, Cardi B, Nicki Minaj, and more on the Audacy app.